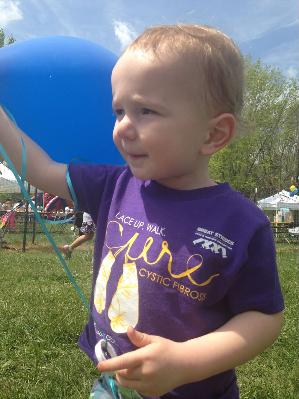 Welcome to My Zach page

This is Zach's journey through my eyes, and all the 'Great Strides' that are happening through the CF foundation.

While pregnant, I found out I was a carrier of CF. That means I had one copy of CF's gene mutation in my DNA; 2 copies (one from each parent) are needed to have a CF diagnosis. Our OBGYN clinic asked us to seek genetic testing for my husband, Nick. We found out that Nick and I were both carriers (each had 1 copy of a CF gene mutation). To both be one of the over 10 million carriers of a mutation of the gene - we had a 25% chance of having a child with CF, a 50% chance of having a child that was a CF carrier, and a 25% chance of a child that would not be a carrier. Not bad odds!

We did NOT seek further counseling, or research what it would mean to have a child with CF and we were content with that. We had a hectic pregnancy...we moved to another state, bought a home, removed one income (me), increased job responsibilities (Nick), and had to figure out life with one car in a rural area in which we started living. I thought, we got threw all of these dramatic life changes while pregnant...and we didn't really feel the genetic make-up was a red flag. It was something we quickly dismissed as a low chance of happening on our radar.

We became NEW parents with lack of sleep, fearful uncertainty & lots of baby cries - all the time (so pretty typical new parents stuff)! I would think, I wounder if Zach is just colicky? About a week after Zach was born we found out he had CF - 2 copies of a CF gene. We were given next day appointments with a CF care team (5 people) at CHOP and we quickly dove into a day of sweat & stool tests, CF education, CF HOME (terrifying) therapy training, CF meds for digestion (gulp), and a CF handbook that seemed like a million pages long in fine print. My crazy hormonal reaction about the drastic life changes needed for my 1 week old baby were pretty much as expected...I cried - A LOT! It took me about a month to even gather up enough physical & mental strength to become involved in Zach's physical chest therapy. Nick, the natural DAD, did it 2x a day for that first month (or two), and some days - well - he cried through it too. The first year and a half was super hard. When Zach went up in weight, he would need to go up in medicines to digest food...this was necessary for him to be able to capture nutritional benefit from Proteins, Fats, and Vitamins. As you know, babies eat to grow, and grow & eat...we worked so close with the CHOP care team. We found 2 types of his medicine stopped being effective, that he needed to be on the max dose of medicines for his size and also needed an acid reducer so he could all those meds.

Fast forward to today, and you will see a happy, inquisitive, serious, silly, and smart 6 year old who doesn't LOOK sick. A lot of work goes into NOT LOOKING sick these days...
2 hours of Chest Physical Therapy to clear his lungs,
Inhalers and coughing 4x a day to help clear his airways,
about 30 high dose pills/day to digest fats & proteins,
added SALT to everything to prevent dehydration (CF-er's are deficient)
antacids daily to his meds,
extra fat-soluble vitamins (since he has trouble digesting fats) daily,
allergy medicine(s) and nose sprays daily,
a healthy dose of running like a crazy person aka exercising daily,
and lastly weeks of antibiotics to eradicate bacteria that incubates in his lungs.

Great Strides...in research and development
The mission of the Cystic Fibrosis Foundation is to cure cystic fibrosis and to provide all people with the disease the opportunity to lead full, productive lives by funding research and drug development, promoting individualized treatment and ensuring access to high-quality, specialized care. Virtually every approved CF drug available today was made possible with CF Foundation support.
1962: The median predicted age of survival is 10.
1978: The number of Foundation-accredited care centers totals more than 100.
1980: The median predicted age of survival is 18.
1989: A team of Foundation-supported scientists discovers the defective CF gene and its protein product (CFTR) years before the human genome is mapped. This discovery opens the door to understanding the disease at its most basic level.
2000: The median predicted age of survival is 32.
2007: Foundation launches its first March on the Hill to help educate elected officials about the need for continued funding for the NIH, FDA and other drug development and research programs.
2013: Two large international Phase 3 trials of Kalydeco in combination with lumacaftor (formerly VX-809) in people with two copies of the most common CF mutation (like Zach), begin.
2015: People with CF are living into their 30s, 40s and beyond.

Every dollar counts, every donation matters, and all the support/advocacy/awareness is TRULY appreciated and meaningful in the lives of those affected directly by CF. We will not stop fighting until CF stands for 'Cure Found'. We have the unique ability to effect REAL change in the CF community and in Zach's lifetime. Zach is a strong boy, a caring son, a beautiful friend, and an incredibly hard worker for his health! He has CF, but CF does NOT have him.