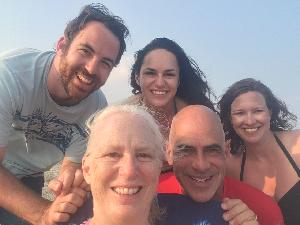 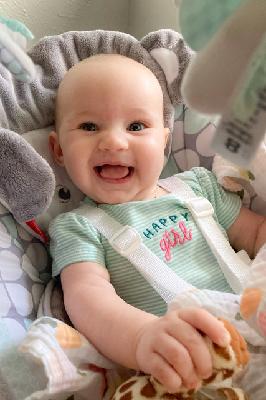 This has been a wild year, so allow me to properly triage my life updates:

1. I got bangs.
2. My dog Zoe wrecked our living room curtains.
3. David and Rebecca welcomed their first child into the world.
4. I have a case of the Mondays.
5. What’s that? Oh yeah…David and Rebecca had a baby, but did you hear about my bangs??

Yes indeed! The Cray family welcomed Michaela Erin into the world on November 19. She’s an ideal midweight champ, having weighed in at 8 pounds, 8 ounces. David and Rebecca have taken it all in stride and have developed their snuggly, doting, sleep-deprived parental routine. Their dogs seem to be adjusting as well, though they were no doubt confused why David and Rebecca decided to adopt a puppy with no hair. Michaela is now at the point where she’s bossing her mom and dad around even though she can’t speak coherent words yet. She also possesses an ability to contort her little eyebrows to express shock, delight, sleepiness, and when she’s about to poop.

Dad’s quest to learn Spanish continues, and it sounds like he’s really getting the hang of it! I say “it sounds like” because I only recognize words that can be found on a Mexican takeout menu…but really, he sounds quite Spanish-y! He has also been able to return to his volunteer work at St. Christopher’s Hospital for Children now that covid restrictions have relaxed. He holds babies in the NICU, plays with the older kids, and compulsively organizes the hospital’s library of children’s books. Like with all things he does, he has thrown himself into this work with a berserker-level intensity. I’m very proud of my altruistic Viking father.

Mom continues to rock the healthcare world. She would modestly tell you that’s an exaggeration, but I can assure you it’s not. She has a constant stream of projects coming in, and that doesn’t look like it’s going to stop anytime soon. She’s collaborating with world-class doctors to make sure that hospitals are safer and more efficient, and I think that is pretty awesome!

Speaking of hospitals, I am thrilled to say I haven’t been spending much time in them! Since I went on Trikafta, I’ve been feeling…well…normal! It’s a bizarre feeling, but I’ve already grown so used to my new healthy lifestyle. In fact, when I catch a cold now, I curl up into a pitiful mass and whine about how stuffy I am…it appears that if you don’t use resiliency, you lose it!

Instead of spending all my time being sick, I’ve been doing “normal” grown-up things. For instance, last March I started working as a video editor at Johnson & Johnson (I help make the videos they post on social media). I think I’m adapting pretty well to corporate life and have even learned a few new business pleasantries. In fact, when I handed mom my draft of this letter one year after it was due, I said, “My sincere apologies for the delay!”

Yes, life has been good! And it’s due in no small part to a tiny pill that I take twice a day. Going on Trikafta was a strange, wonderful experience. In a mere two weeks after my first dose, the symptoms I had experienced for 23 years seemingly vanished. To this day, I feel like it was almost too easy. I suppose I’m still getting used to the idea that miracles are real…

We desperately want to make sure that all CF patients get to experience this miracle, but there are many who cannot be treated with Trikafta or the other drugs in its class. And as great as Trikafta is, it is an extremely costly medication with lots of side effects. So the quest for a cure continues! We would greatly appreciate your continued support in this journey.

To donate, click on the "Donate to Mara" button above.
For anyone who wants to donate by check, please make them payable to the "Cystic Fibrosis Foundation" and send to us at: Team Cray, 143 Brentwood Terrace, Mount Laurel, NJ 08054

Love you all,
Mara and the Crays