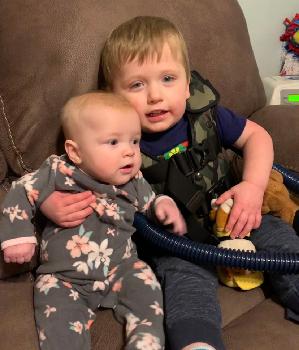 August 8, 2019 I received a phone call that would forever change our lives. My beautiful daughter Evelyn was 11 days old when I got a call from her pediatrician that something came up on her newborn screen. He went on to tell me that she had a gene mutation for a genetic disease called Cystic Fibrosis (CF). Immediately my heart sank into the pit of my stomach. I’m trying hard to pay attention to what he was saying but having to fight to hear him over my own thoughts. “Genetic” “therapy” “people are living longer” “Great Strides” “the outlook is much better than it was 20 years ago” were just some of the few things I caught from his phone call. I made the mistake of Googling Cystic Fibrosis immediately after getting off the phone only to find information that was completely terrifying but later would find out was outdated and not always accurate.

We were referred to Milwaukee Children’s Hospital for a sweat test to confirm what we already knew. At that time I pushed for my son to have one as well. His newborn screen hadn’t flagged him for CF, but being his anxiety riddled mother I wanted the warm and fuzzy that he wasn’t affected as well.

August 20, 2019 was our appointment for the sweat tests. I had Evelyn in one room and Josh had Bennett in another. For those wondering what a sweat test is here is a great link: https://www.cff.org/What-is-CF/Testing/Sweat-Test/ Once the test was complete we were just waiting for the counselor to bring us the results. Josh and I were getting our own blood drawn for Genetic Testing when our lab lech got a phone call. She then told us “they” were on there way up to talk with us. Here it was again; the terrible feeling in the pit of my stomach I had gotten just a couple weeks prior. When the genetic counselor walked in WITH our Pulmonologist I knew the news had to be unexpected. It was then they also informed us my 2 year old son had CF based on the sweat test. I was devastated, Not only would my daughter have to suffer with this damn disease but my son would too and has been for 2 years unbeknownst to me.

I felt that it was important to know our history before continuing sharing our journey with you. What is Cystic Fibrosis? https://www.cff.org/What-is-CF/About-Cystic-Fibrosis/
Cystic fibrosis is a progressive, genetic disease that causes persistent lung infections and limits the ability to breathe over time.
In people with CF, mutations in the cystic fibrosis transmembrane conductance regulator (CFTR) gene causes the CFTR protein to become dysfunctional. When the protein is not working correctly, it’s unable to help move chloride -- a component of salt -- to the cell surface. Without the chloride to attract water to the cell surface, the mucus in various organs becomes thick and sticky.
In the lungs, the mucus clogs the airways and traps germs, like bacteria, leading to infections, inflammation, respiratory failure, and other complications. For this reason, minimizing contact with germs is a top concern for people with CF.

Currently my kids have chest PT twice a day unless they are sick, then it is more. For Bennett that is done with a vest that vibrates quickly to help move mucus through his lungs and prevent it from getting thicker and settling. For Evelyn, we manual use cups in different areas around her lungs to move it that way. When she turns one she will also get a vest like her brother. We bring them to Milwaukee every month to check on things and make sure they are still healthy and happy. Evelyn takes extra vitamins and salt daily to replenish what her body isn’t maintaining by itself.

We are doing everything in our power to continue advocating for our children. My hope and goal is to continue to raise my children to have no limitations. And I will not stop until CF stands for Cure Found.
“Their Fight is my Fight!”