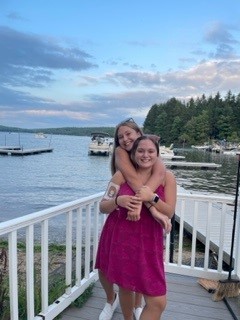 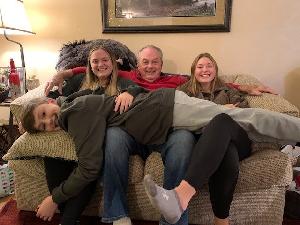 Pap Pap and his treasures!

This May 9th will mark 19 years years for my niece Sydney! Every person's birthday is special, but for a person with CF each additional birthday is just a little more special and they wouldn't be possible without people like you.  Each donation helps fund research for new treatments that allow those with CF to live longer, achieve more milestones and hopefully see the dat when CF stands for "Cure Found'.

This past year has had many ups and downs for Sydney.  It was her freshman year of college -- lots of new adventures while also for the real first time having to live each day with CF on her own as she was away at school.  Sydney really thrived at school and with "owning" her CF but CF also threw several curve balls her way.  This past year Sydney has had several hospital stays in order to get IV antibiotic treatments, a lung scrap, etc., including one stay that happened right around 1st semester finals at school.  Sydney pushes through and never gives up.

This most recent stay found that she has a mico bacteria in her lungs.  A CT scan revealed a few spots where it is growing and where some damage has occurred with her lungs.  She will be spending this 19th birthday in the hospital where they will do a full lunc clean out and start treatments to hopefully kick this bacteria to the curb.  In addition, she has volunteered to be part of a study to further research this bacteria so hopefully they can find better treatments and/or a way to prevent CFers from developing it.

I know there are a lot of places and groups where people can make donations but I ask that in honor of Sydney's 19th birthday consider donating $20 ($19 for her birthday plus $1 for good luck:)).  Every bit helps as we truly work to find a cure.

Here is a link to Sydney's annual video:  https://urldefense.proofpoint.com/v2/url?u=https-3A__legacy.kizoa.com_Video-2DEditor_d382476730k6255507o1l1_CF-5F2022-3Ffbclid-3DIwAR2HnTeO1zRJuDwmSgXghX-2DAq1w-5FMpn-2DgAxJEw6AymxrYE3JpFDkjRZg64Y&d=DwMCaQ&c=NUhaNIajfB1frln1iJ2Yk7NG56jrODI6LbjgSoSeFoE&r=lMaIUw9tJMmpZe_ePdeKX4ukDAg77Xkf7wRGu0ClKKI&m=aK6rWBdYFtxpzjoChUmd23JjfwVsAKBCW_y05MQhDQAdUUr7LBRwX-oc9acuG9vK&s=b1BZTrXsorc9K3EpT1Hx4l8Z5OlxgB16e25l0TxQfPc&e=