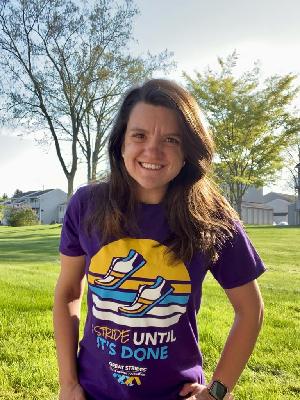 I learned that I had cystic fibrosis back in 1992, when I was 1.5 years old. I'd lost weight and had a cough that wouldn't go away, and after numerous tests my parents were told that I had CF.

I have been very lucky next to most CF patients - hospitalized just twice (1992 and 2008), and I've outlived what was once the life expectancy for people with CF. Most CF patients take handfuls of pills, and undergo respiratory therapy, multiple times a day. I don't. This does give my family and me more latitude than most have though, to raise money for a cure, and have we ever - more than $250,000 (a quarter of a million dollars!) raised in 27 walks so far!

On January 19, 2015 I learned that the type of CF I have makes me eligible for a new drug, one that has been shown to greatly improve people's overall health. I'm already lucky in my health, but this new medication has made me even healthier. It is because of donations that this medication was made possible. That is HUGE, and we thank everyone who has ever supported us - be it once, or going back 15 or more years. I am confident that in this lifetime, CF will stand for Cure Found.

If you are able to support my fundraising efforts this year, I would appreciate every bit! The generous support that we've received over the past 27 years has made a world of difference, both for me, and for every other person living with Cystic Fibrosis. You can visit http://planetgeorge-usa.com/cffaq/ to learn more about CF and me.