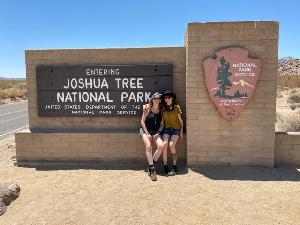 Julia was born in February of 1981. I was too young to remember her birth - I had only been born a year and half earlier. To me, we have always co-existed. Back in 1981, the life expectancy of someone with cystic fibrosis was 18 years old. No one knew Julia had cystic fibrosis yet.

In 1989, while we were out riding bikes and making boondoggles from the red box in the park, there was a breakthrough finding in a research laboratory not too far away – the identification of the cystic fibrosis transmembrane regulator (CFTR) gene and its CFTR protein product. A year later in 1990, there was proof that restoring the defective CFTR activity was possible. We had no idea what that would eventually mean to us.

In the ensuing years, while we embarked on family camping trips and cheered Julia on at her baseball games (as the only girl on the team, by the way), tireless scientists were busy identifying more than 1,700 CF gene mutations and were sequencing the entire DNA of the bacteria that was the most common cause of CF lung infections. We were unaware.

Then, when she was in high school, our family got the devastating news – it was much more than asthma that Julia was struggling with. She had a rare genetic disease called cystic fibrosis. We were told then that the median predicted age of survival was now 32.

Around this time, new inhaled hypertonic saline treatments were available. Drugs that could directly target the defective CFTR gene were in the developing stages, and the FDA had just approved the first aerosolized antibiotic designed for CF.

Between breathing treatments, clinic appointments and hospitalizations, a teenage Julia was busy in the beginning stages of her soon-to-be influential archival website that would eventually land her an incredible career opportunity. She seemed pretty determined: CF was not going to stop her from living her life to the fullest.

During these years I began to realize a few things. I learned that back in the 1950s, children with this disease didn’t survive past their 10th birthday. I realized that the life expectancy had been steadily climbing due entirely to a nonprofit organization of devoted parents, scientists, fundraisers and advocates called the Cystic Fibrosis Foundation. I became aware that they had been fighting for Julia her entire life. They were determined to find a cure and they were not going to stop. I knew that I had to join the fight. The CF Foundation is the reason my sister is here with us today.

Today, the median age of survival has climbed to 50. While the advancements are astounding, the painful truth is that cystic fibrosis still regularly takes the lives of young people. For the first time ever, we are seeing adults with CF - they get married, have children, finish degrees, have careers. It’s more crucial than ever that we continue the development of drug therapies - especially alternatives to antibiotics for CF patients who battle recurrent infections and develop resistance.

We must keep advancing. We must continue gene therapy research and work to expand our knowledge of the underlying biology of the disease and its long term effect on the body. And it’s absolutely critical that we make sure mental health services are available to all patients and their families.

Julia is truly the strongest person I know. An absolute warrior who continues to march forward after a setback. I don’t know anyone else in my life with such courage and drive. She is on the front lines of a battle and takes advantage of new therapies as soon as they become available - forever changing the lives of generations to come.

The Cystic Fibrosis Foundation is the key to a cure.

Please consider making a donation this year in her name. Your gift to team Fer Jules makes an extraordinary impact.