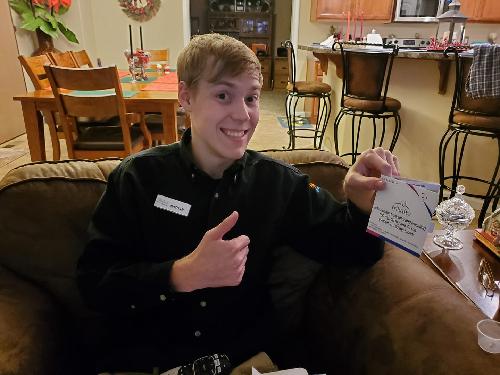 Nathan Timothy Finke was born 6 weeks early on April 27, 2001 at Kadlec in Richland. Eleven hours after birth he was airlifted to Sacred Heart in Spokane where he was given an emergency Colostomy due to Meconium ilius (a common CF condition for newborns). A DNA swab confirmed our worst nightmare 5 days later - Nathan had Cystic Fibrosis !

He endured a 2nd surgery five weeks later to re-attach his colon, and spent his 1st two months of life in the NICU in Spokane. On his 2 month birthday we were finally able to bring him home, and cautiously settled into our trying and stressful new routine of caring for a newborn with special needs. Nathan's health gradually improved until he was diagnosed at 4 months with a CF related liver disease which also causes additional health problems along with more medication. Since then Nathan has been healthier than most CF children and has not been hospitalized. Our family has been fundraising since he was in Sacred Heart in 2001. Each year Team Nathan has grown and each year we raise thousands of dollars for the Cystic Fibrosis Foundation through a variety of fundraisers. Team Nathan has been in the top fundraisers for the state of Washington ! Nathan is 19 years old and doing well, however, Pseudomonas (a bacteria that causes permanent scaring of the lungs in CF people) is a constant reminder that his health will continue to deteriorate throughout his young life. He is very fortunate to be on the newest breakthrough drug Trikafta after starting in the beginning of December 2019 this drug is changing people's lives!! We are encouraged by the developments in CF research and will never stop fighting for a cure! WALK WITH US!

Please support US in our fight to cure CF!

If you are a member of this team and would like to customize this page with a special message or team photo, please contact us and we can designate you as the team leader.