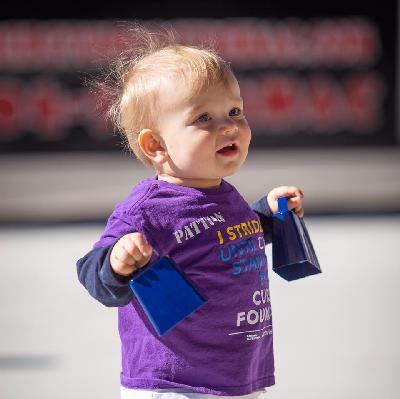 Just like most cystic fibrosis stories.. Patton was diagnosed after a failed newborn screen.  To say the least, the diagnosis took us very much by surpise.  We had maybe 2 minutes to process the diagnosis before we had to learn how to keep him as healthy as possible.  We immediately launched in to learning how to adminster medications, do chest physiotherapy and every thing that he would need to get a good start.  The first year was unbelieveably hard.  He spent most of the sick season with RSV and the flu.  He never went out in public but illness still found him.  We spent the summer months trying to come into our "new normal".  After Patton's first birthday we recognised that he was having some feeding difficulites which has led to weekly feeding therapy vistits and a tongue tie revision.  Since he was already going under anestheshia, we opted to go ahead and do a bronchscopy that way our Care Team could take a good hardy look at the lungs.  As we knew from xrays earlier in the year, Patton has lung damage even at 12 months of age.  During the bronchoscopy we have discovered that Patton now has staph growing in his lungs.  We do everything we should be doing.  But still our baby had turned a new leaf in the cystic fibrosis chapter.

Patton is a fighter.  He has completed over 800 hours in a year doing his Vest treatments or chest physiotherapy.  Taken thousands of pancreatic enzymes and other medication.  But he is so happy and full of life.

We would love if you would join our family and friends as we walk to cure CF.