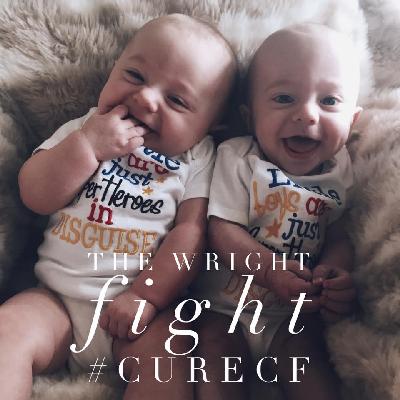 Welcome! This is my 6th year hosting The Wright Fight at Great Strides Walk in Charlotte, NC. I look forward to seeing some new faces and am grateful for those who have participated in the past. Come join us and bring your friends and family on May 21th, 2022 to walk in honor of The Wright Fight.
I walk in honor of my dear friend Magen and her family. Magen and I met our first week at Auburn University and quickly became great friends. Below is a note from her family explaining why we walk and what CF is about.

Note from Magen and William about the boys:
Merritt and Campbell Wright were born on August 9, 2016. Fifteen days later while in the NICU we got the devastating news that the boys had Cystic Fibrosis. As we sat with tears streaming down our faces, we had no idea what this meant. To be honest, until that point we knew nothing about cystic fibrosis. The first thing that came out of the RN's mouth as well, I don't know what to tell you in terms of life expectancy. There I sat thinking I would lose my babies before they even left the NICU. As the NICU nurses and doctors tried to defuse the situation, we were told the basics of CF, we learned that CF affects the lungs and digestive system and that each case is very different. We heard a story of a 35-year-old who lives a happy life full of lots of high-fat foods. We quickly realized that we wouldn't lose our boys to CF right away, but CF would take its time and progress into a life-threatening disease. The boys were registered at one of the top hospitals in the nation and a week later we were greeted by our team of caregivers. We sat in a small room and watched as doctors, nurses, and dietitians quickly put on a gown and gloves before entering the room. We were told this would be normal at each visit. We were given a three-inch binder that would be a manual to CF and the care we are expected to give to the boys. After the five-hour appointment, we drove home and our reality quickly started settling in. We now frequent Texas Children's hospital in order for the care team to keep a good eye on the boys. The biggest concern right now is weight gain as this directly correlates to lung function. The boys have begun two breathing treatments followed by chest physical therapy twice a day in order to break up the thick mucus trapped in their lungs. They received enzymes before each bottle in order to retain the nutrients as the thick mucus also affects their pancreas function. This is our normal. The boys already take around 20 pills as well as additional supplements each day. With all this being said, there is still HOPE! The CF foundation has now made two FDA-approved therapies that treat the basic defect in CF for more than half of the population. These drugs are changing lives, and for that we are grateful. The drugs made available now will not help the boys as they have a rare mutation known as a 'nonsense mutation'. There is continued research going on to find something that will help Merritt and Campbell and that is why we are fighting so hard to raise funds for the CF Foundation. The CF Foundation is determined to find treatments and cures for everyone, including those with rare or nonsense mutations. Approximately 30,000 Americans are living with Cystic Fibrosis. You are joining a growing group of people committed to finding a cure for Cystic Fibrosis. Together, we are adding tomorrow to the lives of people living with CF by supporting the search for a cure. We're so thankful for all the love and support that continues to pour in. Our boys are fighting this battle with the very best and we thank you for taking the time to walk, donate, and share our story.

2018 Boys Update:
The boys have started using a vest machine to complete chest physical therapy in order to help break up the thick mucus in their lungs. The vest is used while they nebulize hypertonic saline, which thins out the mucus in their lungs making it easier to cough up. They complete two, twenty-minute sessions of treatments, which means in the last year we have spent 243 hours hooked up to machines in order to fight this disease. In addition to daily treatments, the boys take 25 enzyme pills daily to help digest the food they eat. We give them additional vitamins, probiotics, and salt in order to make up for what their body lacks. All this being said, we continue to fight and know that as they age the number of medications and treatments will grow. However, we do believe that with the help of the CF Foundation there could be a medication in the near future that will greatly improve their quality of life. The possibility of better treating Cystic Fibrosis is made possible because of people like you, who take the time to donate and raise awareness of this life-treating disease.