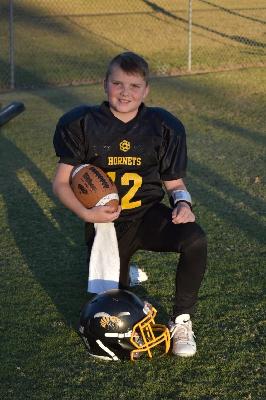 We are excited to again be able to raise money for the Cystic Fibrosis Foundation in hopes of finding a cure. Due to Covid this year there will not be a walk at Cherry Park like in years past but, we still feel that we can do our part. In just the past 12 years we have seen firsthand, how the research is paying off and allowing those who live with Cystic Fibrosis to have healthier lives. Some of you may have heard that a few years Hudson’s pancreas began producing enough enzymes on its own. Let me say this was a huge shift for us. See when Hudson was born, we were told, and tests proved that his pancreas was “insufficient” meaning it couldn’t produce enough to do the job it is intended for. This is why he took so many pills each time before eating. Well after a hospital stay back and many tests. The doctors believe the pancreas repaired itself due in part to an experimental medicine that he began when he turned six years old. When Hudson began taking this medicine it was very new to CF patients and there aren’t tons of people who have seen the results that we have. Hudson was able to stop taking over 40 plus pills a day. We will continue to monitor and see that his pancreas is functioning, and he will be able to stay off of those meds. But as for now, we are so blessed and thankful to say the least!!!! With that said this was made possible through the CF Foundation who utilized money raised for the research of medications. They continue to have new medicines come down the pipeline. We owe a big “thank you” to everyone who supports us each year through t-shirt sales, on-line donations, and coming to the walk. We cannot thank you enough!!! Please don’t stop now... we need to continue our fight for a cure. For those of you who are reading our story for the first time. I want to tell you more about what Cystic Fibrosis (or CF) is and what it means to my family. Twelve years ago our two-week old son, Hudson, was diagnosed with CF. At the time, it seemed like a nightmare. Here was our first-born child who appeared to be perfect. It was very heartbreaking to know that there was so much we couldn't see and understand then about what was happening on the inside of his little body. So, you may be wondering what exactly is Cystic Fibrosis? CF is a life-threatening, genetic disease that causes persistent lung infections and progressively limits the ability to breathe. In people with CF, a defective gene causes a thick, buildup of mucus in the lungs, pancreas, and other organs. In the lungs, the mucus clogs the airways and traps bacteria leading to infections, extensive lung damage and eventually, respiratory failure. In the pancreas, the mucus prevents the release of digestive enzymes that allow the body to break down food and absorb vital nutrients. So in the coming weeks after Hudson's diagnosis our lives were turned upside down. We had countless doctors’ visits to learn how we would care for Hudson in order to provide the healthiest life possible. For us to do this, Hudson has had countless surgeries, hospital stays, and has a daily routine which involves chest therapy (a minimum of 2 times daily), 4 breathing treatments, and he consumed a minimum of 46 pills daily (that was then.... now this has been reduced significantly). So, when I hear people say "he looks so healthy" I take that as a compliment for all the hard work that both he and everyone in my family puts into keeping him this way; however, I don't want you to be deceived. This disease is REAL. Just because someone "looks" healthy doesn't mean they are. I have hugged and cried along with another CF mom who was burying her daughter. This is the same family who also walked year after year to find a cure. So, I can't give up. This isn't just my son we are fighting for, there are 30,000 people who live with this disease. Please join us as we raise money for the CF Foundation by donating or through the purchase of a "Team Hudson" t-shirt. if you would like to fundraise along with us by joining Team Hudson, you will be able to share Hudson's story and raise awareness to those around you or if you would like to make a donation please click on the link below. Last and most importantly, I ask that you keep Hudson and our family in your prayers. As you know, dealing with an ongoing illness like this takes its toll on everyone involved. It isn't always easy but giving up is not an option. Thank you for your time and your consideration.