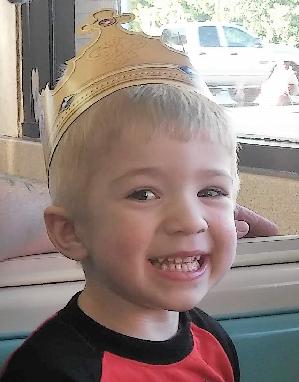 Cystic Fibrosis is a chronic, progressive, life threatening disease that affects 33,000 Americans and over 70,000 people worldwide. They are moms, dads, sisters, brothers, daughters, sons, friends and co-workers who struggle every day just to breathe. My five year old son Devland is one of them.

We got Dev’s diagnosis just a couple weeks after he was born. He hasn't known anything but life with breathing treatments, chest percussion, enzymes, trips to the doctor in Los Angeles, blood draws and chest X-rays. A few years ago, we added enteral night feedings to that routine. Sometimes it seems like all we’re doing between treatments and therapies is setting up for the next one.

Just to give you an idea of this little dude's schedule, here’s a snapshot of his typical day:

Devland's day starts begins between 0400 and 0530 when the alarm on his Kangaroo Joey pump starts blazing, signaling that his enteral night feeding has completed. One of us gets up, flushes his tube, and disconnects his pump. He’ll get a dose of enzymes to help him digest the feeding he just completed, then he usually wants to cuddle for a little while, which is one of the highlights of my day. This little dude gives AMAZING cuddles.

At around 0700, Dev gets another dose of enzymes, and his first antacid of the day. He'll get a high fat, high salt breakfast accompanied by a high calorie, protein infused “apple juice” and we’ll settle into breathing treatments.

Morning breathing treatments include an aerosolized dose of albuterol and hypertonic saline for twenty or so minutes, a dose of Pulmozyme for another fifteen minutes, and twenty minutes in his CPT percussion vest. By the time he’s fed and has his morning treatments, it’s already well after 1000.

He’ll take enzymes again every time he eats during the day. It works out to 30-40 enzyme pills per day. There’s another breathing treatment in the evening consisting of the albuterol, hypertonic saline, and percussion vest.

At 1900, he’ll get his last dose of enzymes, 2 ml of fat soluble vitamins A/D/E/K, and a second antacid. We’ll clean the area around his G-Tube, give it a turn, and hook up his Kangaroo Joey pump. The pump will deliver 495 ml of high calorie amino acid-based formula at 55 ml per hour over 9 hours, then the process starts all over for a new day.

These are the stats when he’s healthy. If he catches so much as a cold, breathing treatments are doubled and he has to go on aggressive oral and nebulized antibiotics to preserve his lung function. Most cystic fibrosis patients spend a minimum of two weeks hospitalized per year. We’ve been incredibly fortunate that this little guy has gone five years with just one hospital admission, and that one was for G-Tube placement, not for an infection.

It’s absolutely amazing that any of these treatments and therapies even exist, and many of them only just came around in the last few decades. As recently as 1980, CF patients weren’t expected to survive grade school. Many of them died in infancy. The average life expectancy of CF patients was just announced as 47, up from 37 just five years ago when we got Devland’s diagnosis.

The Cystic Fibrosis Foundation is responsible for the nearly all the advances in therapies and drug development that have allowed patients like our Devy to thrive. There are some pretty amazing therapies and drugs in the pipeline. It really looks like the cure for CF could happen in Dev’s lifetime, but research takes funding. Lots and lots of funding. The process to develop one drug in the United States costs between four and eleven billion dollars.

Things are a little different this year than in years past. What used to be an in-person 5k event with a DJ, a bagpipe band, Storm Troopers, BBQ, and snow cones has turned into a virtual event out of necessity. It remains one of the Cystic Fibrosis Foundation's biggest sources of funds for their life-extending research and programs.

Help me reach my fundraising goal by donating to my Great Strides fundraising campaign. Your 100% tax deductible gift helps Devland and CF patients like him lead full and happy lives by funding the research that extends their lives and enriches their quality of life. Together, we can add tomorrows for people living with CF.