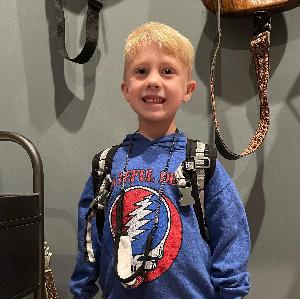 Thank you so much for visiting Grayton's Guardians of Raleigh Page! We are happy to walk in honor and support of Grayton and all his buddies who fight this difficult disease daily. I did not know much about CF until Grayton was diagnosed at 10 days old. We have come a long way and with your help will continue to pursue finding a cure. I have an incredible update from Grayton’s parents to share on his condition:

This past year Grayton turned 6 years old. While being 6 in general is AWESOME, it meant more in the CF world since the approval of TriKafta for 6-12 years of age that happened just last year. TriKafta is a revolutionary new drug therapy for certain CF patients and Grayton is one of them. He started taking TriKafta the day after his birthday this past September. In 6 months’ time we've seen dramatic changes in Grayton's test scores at the doctor's office. When Grayton was 2 weeks old, he was given a "sweat test" which measures the amount of chloride/salt in your sweat. CFers don't have the ability to absorb salt and pass it between cells, so a lot of that salt passes out of the body through sweat. They used to talk about CF babies and "salty kisses" otherwise known as the "kiss of death” back in the day. The lack of salt absorption inhibits the body's ability to absorb nutrients and stunts growth over time. Often CFers are smaller in size as a result, as well as high risk for malnutrition and things like COVID. The "sweat test" is considered the most reliable test for Cystic Fibrosis. A normal test result would be between 30-60 out of 100. When Grayton took the test at 2 weeks old, he scored a 95, guaranteeing to us that he has CF and blowing up our world in the process. Just this past month we asked his doctors if he could take another "sweat test". It's outside of normal protocol to have this measured after a positive result but they agreed to the test after we begged and pleaded. Grayton scored a 45 out of 100. 45!!!!! He still has CF genetically but his ability to absorb nutrients is closer to a normal child. It's not a cure, but this is HUGE NEWS for us as well as the entire CF community! His doctors are blown away and asking all their TriKafta patients to now get a sweat test going forward.

Making a difference feels so good. I know everyone has been so charitable as of late and I appreciate any small amount you can do for Grayton and finding a cure for this disease.

All our love,
Jackie, Eric, Zachary and Jake