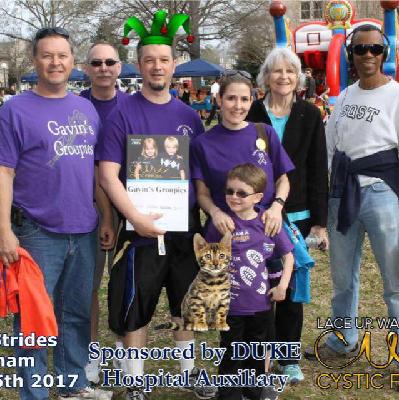 Meet Gavin, our school-age bundle of energy!  He doesn't "look sick" or "like there's anything wrong with him."  That's the life of a child with CF.  You don't always see them on oxygen, struggling to breathe.  A lot of times, you just see a happy, active kid.   In fact, with the changes made with the advancement of cystic fibrosis treatments-he's thriving! 11 medications now down to 4 (not including vitamins). He stays active, has normal lung function, and works though a lot ot things tweens go through

We started our group in 2011 as "Gavin's Gang."  The name was changed to "Gavin's Groupies" in 2012 as an inspiration from a picture of Gavin holding a toy guitar and in observance to his budding love of music. (Apparently others in the nation thought this was also a neat idea since there are Gavin's Groupies in Wisonsin and Minnesota-no relation but who cares-right?)  In 2013 we expanded and became a national team with walkers in our home state of North Carolina, then Pennsylvania (thanks to the efforst of Gavin's Grandma Deb), and Colorado (thanks to his Aunt Tracy, Uncle Scott, and cousin Jackson).  We also had an unregistered third team onboard a cruise ship in the Caribbean (thanks to Grammy Sharon and Poppy John).  We are hoping again this year to revive the National Team, so anyone who wants to help, please let us know!

In 2015 we set a small goal of $1000 and through help of family and friends, we raised it!   In 2016, we are hoping to be even better.  Yes, we're looking for you to ask people for money.  Sometimes this is difficult but visit www.cff.org and you can see how the Cystic Fibrosis Foundation is one of the few organizations that uses virtually all funds raised to make life better and more bearable for those with cystic fibrosis.

For example, Kalydeco was released to market,  as a new treatment for CF.   This drug was the first of it's kind because it affects the disease at a cellular level.  It started a movement for other medications and has changed the course of this disease for thousands. Lives and outcomes are changing. Futures are being built day by day.

There are approximately 30,000 Americans living with cystic fibrosis. We are a part of that community.  Gavin has a very rare mutation found in only 1500 people.    We walk for them.  We walk for us.    My vision is to one day have so many people on our Team walking that we will cover our walk location of Duke's East Campus.   All you need to do to become a member of our team is click on the "Join our Team" button. From there you can make a donation yourself and start your fundraising, or just plan to be there on Walk Day (we're going virtual)!