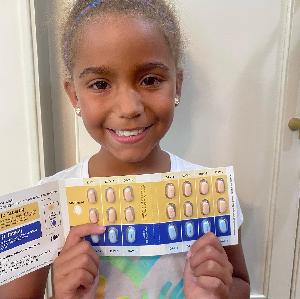 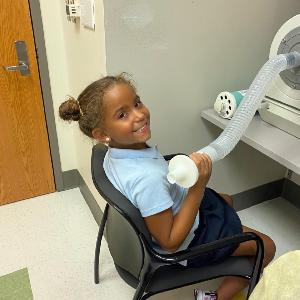 Team Kure for Kennedy was created shortly after we learned of Kennedy's diagnosis with Cystic Fibrosis at 3 weeks old. When we learned of Kenendy's CF diagnosis, I immediately reached out to the Cystic Fibrosis Foundation for help and support, and have been involved ever since. Over the last 8 years, with the love and support of our family and friends, Team Kure for Kennedy has raised over $172,000 for the CF Foundation and know that one day our efforts will be part of an ultimate cure!

The last year has been rough for Kennedy as we've started to see more symptoms of her CF rear their head. Doctors visits started to include the words "severe" and more medicines and therapies were added. Kennedy was event sent by ambulance to the ER on night when urgent care was unable to get her oxygen levels up to a stable level. Her overall lung function dropped to below 80%. However 2021 also brought some good news! A medication that had brought significant improvement to people with CF was finally approved for Kennedy. Within 5 months of starting Trikafta, Kennedy's lung function increased from 76% to 96%. A 20% increase is huge and wouldn't be possible without the help of the Cystic Fibrosis Foundation!

* People with CF lose more salt from their bodies when they sweat. Kennedy actually needs to eat more salt than the average person to compensate for this. Many people with CF are known to have salty skin- and it is rumored that in the middle ages, children with salty skin who passed away at young ages were considered hexed or cursed.

How does this affect Kennedy now?

Well, we do many preventative treatments. Kennedy does something called a "vest" for 40 minutes every day. She wakes up early (and not easily!) before school and does her vest for 20 minutes, and does her vest for 20 minutes before bedtime. We also do nebulizers for 15 minutes every evening. Kennedy also sees a specialist every 2-3 months at UNC where they monitor her lung function. She also gets monthly injections to help her lungs and takes several pills every day.

Now that you know a little bit about Cystic Fibrosis, we hope that you'll consider making a tax-deductible donation to the Cystic Fibrosis Foundation and Team Kure for Kennedy. All of the donations truly go towards helping extend the life expectancy and qualify of people just like Kennedy!