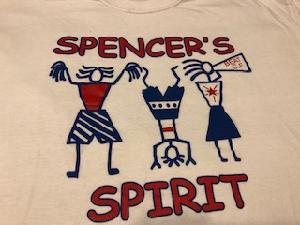 Since the last Cystic Fibrosis walk (which took place in May, 2019) our lives with CF have had some ups and downs. I say ‘ours’ because CF impacts the entire family. The first ‘down’ was when Spencer finished up his freshman year of college in 2019 with a persistent cough. The cough started during the school year and never went away. We were hoping that it would get better once he was home but that was not the case. Because his lung functioning dropped, his doctor decided to admit him to the hospital for I.V. medications. His lung functioning increased some while in the hospital but the cause of his cough wasn’t really identified. His lung functioning dropped again a little once he was home and we eventually surmised that the fumes from his grilling job were irritating his lungs. So… no more short-order cooking for Spencer

Another little ‘down’ occurred during the summer, when Spencer transferred from the pediatric care team to the adult care team. We had been with his doctor and nurse (our life line) since he was one year old, so it was with a heavy heart that we had to make the switch. The adult clinic is very different (not a whole lot of bonding going on), but Spencer has really stepped up and is pretty much independent about his care.

The ‘up’ (which outweighs all of the ‘downs’ put together) took place during the Fall when Trikafta was released to the public. Spencer started this medication in late November after insurance approval and his health improved almost overnight. His lung functioning is now within a normal range, his chronic cough has subsided, and he has gained weight. There is a whole range of potential side effects, but thankfully he hasn’t had any. This truly is a miracle medication and it has been lifesaving. Some people who were waiting for a lung transplant have been taken off the list, because their health has improved so much. We are so grateful for the long hours, sweat, and tears of the doctors and researchers who have dedicated their careers to better the lives of people with CF. We are also very appreciative to everyone who has donated to the CF Foundation. You have saved and changed lives forever!! CF seems more like a mosquito bite now rather than an 18 wheeler heading toward us at full speed.

The last ‘down’ of the year occurred during the COVID-19 pandemic. After our initial paranoia, we have actually coped with the pandemic fairly well. We are a bunch of introverts who really like each other’s company, so staying home is easy. Spencer is totally content with interacting with his friends through videogames and understands the need for isolation. He has only left the house three times to go to the pharmacy drive-through. What we didn’t expect during this pandemic was the loss of Dave’s job. Losing the bigger of our two salaries hurt, but losing our medical insurance has been very scary. I always knew we had really good insurance, but I never really paid attention to how good. In the past year, our insurance paid over $323,075 for Spencer’s medication alone. Add the different doctor visits, x-rays, specialist fees, lab work, etc. and the amount just gets bigger and bigger. Finding a plan that fits our new budget and is willing to cover those costs is overwhelming.

So friends, once again we need your help to keep the movement toward finding a cure going. A cure means that Spencer won’t have to worry about things like medical insurance let alone all the other issues he deals with on a daily basis related to CF. If the pandemic hasn’t impacted your finances significantly and you are looking for a charity to support, we ask the you consider the CF Foundation.