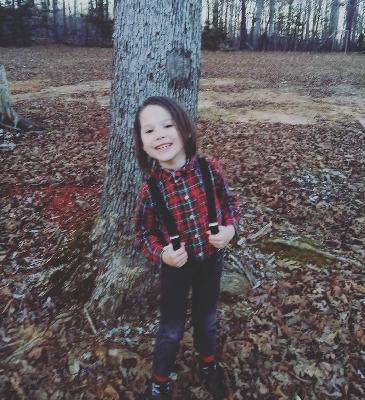 Torin was born with a meconium ileus and at the time we did not know he had Cystic Fibrosis (CF). He spent 16 days in the NICU was not allowed to eat till he passed the meconium which was treated with enemas and when those weren't working initially there was talk of surgery. He wasn't even 2 weeks old then. He did eventually pass it without surgery and he was abl eto come home. Once home he wasn't putting on weight despite having a good appetite. At 2 months old I got the news that he does have CF and we started going to his CF clinic.
Since his diagnosis he hasn't been admitted, but that doesn't mean we've had it easy. We go to clinics every 3 months, once a year he gets blood work and xrays. He is now doing PFT's during his clinic, and with the addition of a new medicine eye exams are added to his care as well. He takes enzymes to be able to put on weight, we do vest treatments now( initially we used percussor cups), and we had to add nutritional shakes to maintain his weight. Along with a bunch of other medicines. We've had two ER visits, one for croup and another for a prolapse (normal in CF patients apparently). Things have been more stressful than fun at times, but we do this fundraiser to ensure that CF patients have a chance at receiving the best treatments available for them. With out the CF Foundation we wouldn't have access to the machines he uses for his health or the new drugs available to aid in his treatment. So while people see the happy times we have there are rough times in between them. He has to take time out of his days to take a break from the fun and focus on his health, but he is still happy to every extent of the word. That's why we do this every year and we would love for you to join us in helping the cause.