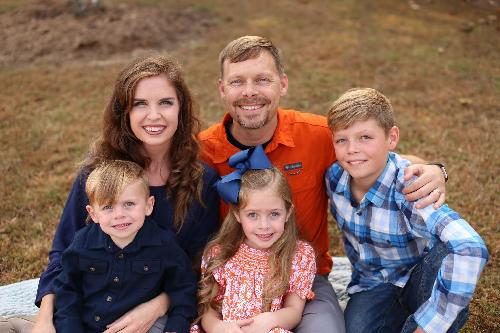 Our daughter, Ivy, was born in September of 2010.  She failed to stool within the first 48 hours, her belly became distended and she wasn't able to keep food down.  She was admitted to the NICU where she spent 10 days.  They performed several different procedures.  Eventually, she began stooling and things were going in and coming out as they should.  Therefore, she was discharged.  However, at 2 months of age, she was failing to thrive and only weighed 5 lbs.  We were then referred to a pulmonologist in Greenville, where she was ordered a sweat test...and on November 4th, 2010, we received the scary diagnosis of Cystic Fibrosis.  Our world was turned upside down.  However, we quickly came to grips with our new reality and learned as much as we could about the disease and how to care for our beautiful new baby girl.  Ivy is doing exceptionally well these days, praise the Lord!  Swallows her enzymes, takes her meds, and does her breathing treatments/chest pt like a champ.

Fast forward to 2014.  We were excited to learn that we were adding another precious little one to our family...estimated date of arrival, Christmas Eve!  Knowing that our daughter has CF, we knew that this newest little one had a 1 out of 4 chance of having CF as well.  So, in July, we opted to have an amnio done to find out if our 3rd child would have CF as well.  We wanted to be prepared in the event that he (which we also found out in July that our 3rd was a boy!) had CF, so that we would be prepared and could provide the best care possible from day 1.  We were saddened to get the results back that he would in fact have CF.  Our sweet and handsome Jude Emory Thomas was born on Saturday, 12-13-14 (coolest birthday EVER!).  Little did we know what the next 3 weeks had in store for us.  On Sunday, 12-14-14, he was admitted to the NICU in Spartanburg.  However, after one of Greenville's pediatric surgeons examined Jude's xrays, he informed us that Jude was suffering from a meconium illeus and suggested that the best thing was for Jude to be transported to Greenville's Memorial Hospital where they would perform a couple of barium enemas to see if the meconium illeus could be dislodged.  After 2 failed attempts, we were informed that Jude would need surgery immediately before things got worse and it became an emergency situation.  So, on 12-16-14, Jude had his operation and spent the next 2 weeks recovering with an ostomy.  We were so sad that Jude would be spending the holidays in the hospital, but we knew that he was receiving great care and knew that he was right where he needed to be.  He made tremendous progress in the 2 weeks following and we learned on New Years Eve that he would be discharged the next day.  So, 2015 started off great as we welcomed Jude home on 1-1-15!!!

So that is our story of how our family was introduced into the world of Cystic Fibrosis.

There are approximately 30,000 Americans living with cystic fibrosis. They are moms, dads, sisters, brothers, daughters, sons, friends and co-workers who struggle every day just to breathe. We walk for them. Will you join us? All we need you to do to become a member of our team is click on the