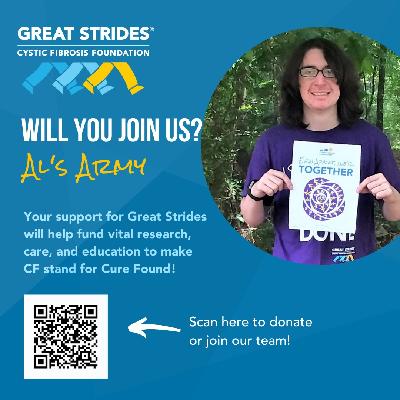 We believe a cure is out there!

We believe a cure is out there!

Al Lee was diagnosed with Cystic Fibrosis in September of 2001, just a few months after he was born. Cystic Fibrosis is an inherited chronic disease that affects the lungs and digestive system of about 30,000 children and adults in the United States (70,000 worldwide).  Those with CF spend hours a day doing breathing treatments, take numerous medications and frequently have lengthy hospital stays to treat lung infections and other complications.

Al has had many difficult years with multiple hospital stays and many painful medical procedures, but we have always had faith that things will get better for children and adults with CF. Although there is currently no cure, thanks to breakthroughs in research supported by fundraisers such as Great Strides, there are many new medications that can help people with CF lead longer, healthier lives.

An example of this is Trikafta, the new triple combo therapy approved in November 2019 which has greatly improved lung function and reduced hospitalizations for 90% of people with cf. Al began taking Trikafta in February of 2020, and he has had amazing improvements in his health; he has not had a hospitalization in over 2 years, he has had his g-tube removed and his weight is great, he has been able to quit taking his biweekly xolair injections for ABPA, he has been able to stop taking the inhaled antibiotics he previously took twice a day, and just a few months ago, he was able to have his port removed! Although we are so grateful, we can't forget about those who already lost their fight and the 10% that Trikafta doesn't help. Fortunately, similar therapies are in the works that can benefit all with cf.  We believe with fundraising, increased awareness, and research and advocacy, help for all those with cf and eventually an actual cure will soon be found.

Please consider supporting the Cystic Fibrosis Foundation by making a donation to our Great Strides fundraising campaign today and sharing this page.  Your gift is 100-percent tax deductible, and 90 cents from every dollar goes directly towards supporting life-saving research and medical progress.Thank you for helping add tomorrows to the lives of people with cystic fibrosis.