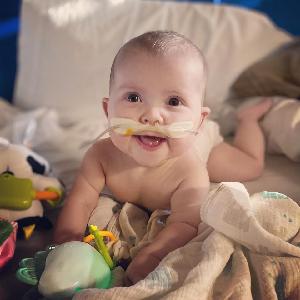 This is our Warrior Princess. The reason we fight for a cure for Cystic Fibrosis.

This is our Warrior Princess. The reason we fight for a cure for Cystic Fibrosis.

For too long, cystic fibrosis, a rare, genetic disease, has robbed people of tomorrows – progressively limiting their ability to breathe and tragically shortening life. There are approximately 30,000 Americans living with CF. They are moms, dads, sisters, brothers, daughters, sons, friends, and co-workers who struggle every day in the face of this devasting disease. We walk in Great Strides for them.

We want to tell you a little bit about our warrior princess Abigail! She was born May 10th, 2019. She was born at 40 weeks and 3 days after a quick and easy induction and delivery. Once she was out, they took her away to evaluate her and called in the two different doctors to look at her because she was breathing like she had had liquid in her mouth that she could not swallow. Before taking her to the NICU, after strong suggestions from Benjamin, I got to hold her for 30 seconds or so. We were told that her trachea was not attached and she would need surgery. After getting her into the NICU and on oxygen, they ruled out the trachea fistula, but she still needed oxygen and her stomach was distended. The next day, May 11th, Abigail had not had a bowl movement and her stomach was still distended. X-rays showed there was a narrowing in her intestines and they needed to do exploratory surgery to either remove the narrowed part of her intestine and close her up or they would have to place a stoma bag while her intestines recovered and close her intestines back a few months later. The surgeon and the head NICU doctor informed us that neither of the things we thought had to happen did not need to be done, but instead Abigail had a Meconium Ileus. Around 18% of CF infants experience this. It is when the meconium (newborn tar-like poop) is so thick it is not passing through the intestine like a normal bowel movement. When this happens, 99.9% of the time it means the person has Cystic Fibrosis. It is was also blocking gas and everything else, causing her stomach to distend. So, they cleaned it out and gave her some medicine to try and help what was left make its way out. This was when we started to pray for a poop and our baby girl to come home. Everyone’s mouth dropped at the words Cystic Fibrosis. They tried to explain to us what Cystic Fibrosis was without saying too much. Really it is all a blur. The only question I remember asking him was, “just tell me, will my daughter be ok? If she will live and be ok, then we can handle whatever.” His response was, “Yes, she will be ok, there are wonderful advancements being made for CF, things may be a little different for her, but she can live a “normal” life. Don’t google Cystic Fibrosis.” After that I have no idea what was said or discussed. She was in the NICU for 28 days and has had one hospital stay since then. To catch up on what we have been doing, more about CF, and Abigail find us on Facebook: Abigail's Advocates.