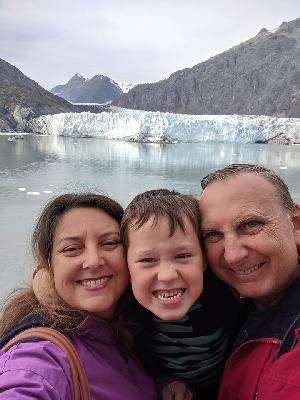 RSVP for a CF Cure!

RSVP for a CF Cure!

* Walking is Optional / You may sign up as a "Virtual Walker" however we hope to see you there!

Our story with Cystic Fibrosis (CF) started shortly after Aug. 30 2013 when our son Riley was born. My husband Eric and I had driven 30 hours straight across the country to get there for his birth. It was unlike any feeling in the world, we were finally a complete family! A few days later we learned that Riley had Cystic Fibrosis (CF). Doctors and Social workers questioned if we would move forward with his adoption, there was no question for us, he is our son! We know that God has an amazing plan for us as a family. Riley has brought so much joy and happiness to our lives, that is just one of the reasons why we fight so hard to raise money to find a cure, for him and all those other warriors like him fighting CF.

Riley went three and a half years without having to be hospitalized but then things started getting more complicated with his first hospitalization in Feb. 2017. He has been hospitalized four different times for two week hospitalization stays, numerous intestinal blockages, sinus surgery and has been on antibiotics more time than most people are in their entire lives and he is only 8. He doesn’t act 8. When he was 6 and playing a video game I groaned ‘I’m horrible at this track!’ Riley answered “Mom, your just going to have to PERSEVERE!”. I really wish my little boy didn’t know what the word persevere means…and he knew it at 6 years old… he had us all laughing even though he was in doing his 3rd treatment of the day. We were on DAY 21 of 3-4 treatments a day to try to get him over a cold and keep him out of the hospital!

In September 2018 he was able to start on Orkambi one of the new drugs specifically developed from the funds raised because of past Great Strides walks (Thank you!) And we believe that is why he had not had to miss school or been back in the hospital until April of 2020 when he had to go into the hospital for 2 weeks of antibiotics and Sinus surgery. Up until Covid hit the world Riley had been able to participate in dance, basketball and soccer at school and was able to keep up with his treatments, school and activities in spite of CF.

Our sweet Riley has had several tough times in April/May of 2020 being hospitalized and having to have sinus surgery, having numerous GI blockage scares and then most recently a scare regarding his heart, which is resolved but being monitored. He has been so healthy, and it has been easy for us to roll his extra treatments and medical needs into our routines--so easy, in fact, that I think we might even have been a little bit in denial about the seriousness Riley's disease. These incidents reminded us that CF is progressive, sneaky and ever-lurking, waiting for a chance to pop up and remind us that it's not going away.

You may have heard that a new medication (Trikafta) received FDA funding last year. You may also have heard that this medication can help over 90% of the CF population. We are super excited about the promise this new drug shows, and we have read countless stories of the incredible things it is doing for people with CF who are fortunate enough to be eligible for Trikafta:
“I haven’t been hospitalized in over a year!”
“My doctors just decreased the treatments I have to do and some of the medications I have to take!”
“My PFTs [pulmonary function tests] went up over 20%.”
And so on.

You may know that Riley became eligible for this med last year. He started on it and his PFT’s (Pulmonary Function Test) score went from 82% to 98% in three months!!! We were so excited!!
What you may not know is that Trikafta hasn't been successful for everyone who has tried it. Or that Trikafta doesn't work on a small percentage of the CF population that includes some of Riley's friends. Or that the drug is so new it hasn't been studied for longterm effects.
In fact, we are part of the population that has bad side effects and can’t take Trikafta. We had to take Riley off of Trikafta.
What is clear is that, while Trikafta is a long-awaited blessing in the lives of those with CF and their loved ones, IT IS NOT A CURE. And we will not rest until 100% of the CF population has an effective treatment--until 100% of the CF population is CURED of this dreadful disease.

Even with the new medication and all the stuff he can do, he looks and acts great when we are out and about but the coughing and bringing stuff up and difficulty at night are among the things you don’t see. The other things you don’t usually see….He takes 12 to 20 Enzyme pills every day before he eats to help him digest his food and get nutrients from the food he eats, he takes an additional 16 pills/powders/sprays medications AND does a minimum of two 20 minute Smartvest treatments with puffer inhalers, 2 Hypertonic Saline Nebulizer treatments, 1 Pulmozyme Nebulizer treatment, does 2 Nasal Saline Rinses and takes a TON of Miralax EVERYDAY….even on Christmas and his Birthday. ALL of that is on HEALTHY days…on sick days he does an EXTRA (4-6) Vest Treatments and Nasal Rinses and could have antibiotics added into the mix. He is a true little warrior but he needs help, YOUR HELP. He needs a cure and you can help make that cure closer to being found by joining our team and/or making a donation to our Great Strides team.
So please come join us in the fight to keep bringing us new medications to help.

By becoming a member of our team and/or making a donation, you are joining a growing group of people committed to finding a cure for cystic fibrosis. Together, we are adding tomorrows to the lives of people living with CF by supporting the search for a cure.
There are approximately 30,000 Americans living with cystic fibrosis. They are moms, dads, sisters, brothers, daughters, sons, friends and co-workers who struggle every day just to breathe. We walk for them. Will you join us? All we need you to do to become a member of our team is click on the "Join our Team" button. From there you can make a donation and start your fundraising if you choose to. Great Strides is a fun, family-friendly event that raises awareness and support for people with CF and their families. Our walk this year will be at NTC Park at Liberty Station on Saturday June 4th, so please come out and join us!
If you can’t walk with us then please support us (and Riley) by making a donation to our Great Strides fundraising campaign today! Help us reach our fundraising goal by donating to our Great Strides fundraising campaign. Your gift will help add tomorrows to the lives of people with cystic fibrosis by supporting life-saving research and medical progress. Your gift is 100-percent tax deductible.