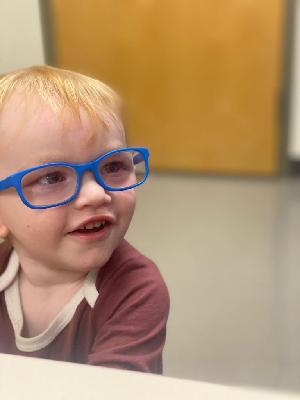 OR and SW WA: Portland

It's going to get busy all month long- let's start with â€œwhat is cystic fibrosisâ€? CF is a whole body problem, not just the funky lungs that come to mind. The problem is ultimately that salt and chloride levels are off because the cells production or gating system is wacked depending on the mutation you have. Salt imbalances create really thick mucous that can't be pushed out and breed bacteria/virus which then become antibiotic resistant. It also causes problems in all of the other mucous membranes, for Xander specifically, that is mostly a problem with the pancreas duct being blocked. He makes his own enzymes, but they can't get out to the intestines where they're needed to break down and absorb fat/proteins leading to malabsorption, bloating, gas, diarrhea, constipation and constant hunger.

Before Xander was born, he contributed to science. I was part of a study that did MRIs to look at the blood flow to the placenta and related birth outcomes.

When he was diagnosed, we agreed to share his files with the CF registry which is a huge reason why there has been so much advancement in CF care. Being able to see outcomes at various centers keeps everyone striving to do their best, and sharing what treatments work best helps everyone.

I'm not publicly sharing trials that we are in as requested by the study sponsor (I'm more than happy to discuss in private), but if the benefit outweighs the risk, we will always say yes. Medial studies help pave the way for better treatments, but they also give hope for those who aren't there yet.

It would have made a difference if I heard that my child could start a modulator before he even had a lung infection, or that there was concrete things that we are/were doing to make the future more clear.

By learning about CF, you're making my life easier because I won't have to wonder if I need to explain that we just won't visit if you have a cold, and that you really are making me happier by rescheduling.

Helping fund the foundation is helping our future by keeping the studies going. Xander will be able to get our latest â€œmiracle drugâ€ Trikafta (either by a study when it opens for toddlers or when he ages into it), but not all mutations have that luxury. It's keeping the search going for treatments. It's also finding current work that we're keeping an eye out on â€œSIMPLIFYâ€ is looking at if/when/frequency of other daily treatments we do like nebulizer and vest are still needed with success from modulators.

It takes everyone together to keep the progress striding forward, and we're thankful for everyone going along for the ride with us.

************
Our CF story began like most peoples do- with no idea we were carriers, or even knowledge of what cystic fibrosis is. We are first time parents and didn't know what is â€œnormalâ€ for poop or eating.

Xander was flagged in a newborn screening, and the pediatrician (who I really liked, but switched to someone who had experience with the diagnosing process) called me multiple times in a day, so I knew something was wrong. He was quick to say that he's never actually had a true positive on one of these tests, so it's very unlikely that anything is actually wrong, but we should re do it to confirm.

I was a hormonal mess, but also celebrating being able to move my body again, so I dealt with the uncertainty by leaving Mike and baby alone while I went to the gym until I was sore achieved dopamine hit. *I miss the gym* I ended up going back into my 23 and me reports (drs say don't rely on them because they only catch a couple of the common mutations) and found that I was a carrier. (Que the guilt fest)

We re did a heel prick test at his 2 week appointment where they also ran his dna aparently, and we were scheduled to see the CF team the same week that results came in, with a trip to OHSU for a sweat test two days after.

As much as it sucks to have a diagnosis, it meant that we could start treating it. Xander started gaining weight for the first time as soon as he started taking enzymes. We learned how to do preventative measures like chest percussions and extra salt. Xander is doing really well today because we know what to watch out for and are working to prevent things instead of waiting for damage control.

In the US, 1:25 people are a carrier for CF, but for it to pass on, they have to procreate with another carrier and then there's a 25% chance of the child having both copies of the mutated gene (CF), or a 50% chance that they will be another symptom free carrier.

Our understanding of CF is that is boils down to mutations of the 508 gene not allowing sodium and chloride (the two components of table salt) to pass in and out of cell membranes. Electrolyte Imbalances is one of the signs in early cf diagnosis history; they noticed that these kids didn't do well in a heat wave with over heating and leaving salty â€œghost fingerprintsâ€ on their water glasses. The salt can't replace itself after its sweat out, so we need to make sure that we replace it with dietary salt. Xander gets a minimum of 1/4tsp of salt a day.

One cool thing to notice is when his feet get wet (a couple of steps on dewy grass) they wrinkle like a person who swam for a long time. Osmosis rules, and salt flows from most to least concentrated areas leaving his skin wrinkled and puckered. Extra salt after that or exercise.

Salt plays a roll in breathing too- without the proper balance the mucous that lines everyone's airways to protect them from debris becomes to thick and sticky to be moved up and out of the lungs, so instead it traps and cultures whatever gets in there. We try to mitigate that by breathing in medications that break down mucous dna as well as salty air (hypertonic saline) after it was found that surfers had better lung function. There's a reason you breathe better at the beach!

Because Xander loses more salt than people should, he can have natural hair gel (we can spike it up and it will hold after a nap) and he tastes salty: kiss his head then lick your lips next time you need a tequila chaser (but don't- pandemic mama would kill you)

***
Community is a huge part of cystic fibrosis. CF research doesn't have any government funding. It is a really rare, special thing that happened because of loved ones gathering together to raise funds on their own to help loved ones. (Future post on venture capitalism)

Most of the people who have donated to our fundraiser have spent very little to no time with Xander. The support for someone you don't really know, but love anyway thank you. I hope once the pandemic calms down we can personally show off just how awesome and strong willed someone with cf really is.

CF started the 6' apart rule after â€œcf campsâ€ where kids would gather together and have treatments/cough together turned deadly. They shared germs with each other that were drug resistant, and incredibly hard to eradicate from sticky lungs. Now doctors have gowns and full contact precautions so that cf germs don't ever cross contaminate, and events have limits on how many people with cf can be there and how close they can be. Before the pandemic, they were the experts.

CF mama groups on Facebook and Instagram have been huge sources of information and connection. There are virtual music classes for kids that Xander is participating in, and a peer connect phone group. We are people who reach out to each other to try to make things easier, because we don't want anyone else to have to figure it out on their own, and we wouldn't be able to do it all without the support of everyone else who doesn't understand it all, but try's anyway.

I posted our Great Strides fundraiser with a personal goal of $200. Tonight a non Facebook donation brought me up to $975.

I fully believe that Xander is going to be the first generation of CF fighters who gets to live with this as a manageable disease instead of a shortened lifespan. You are all part of that, donating or just reminding us that you care, and that you see us teaching him to fight too.

It takes a village. Thank you for being part of ours, even from beyond 6'
View More
View More
Join Team
Team Roster
Raised