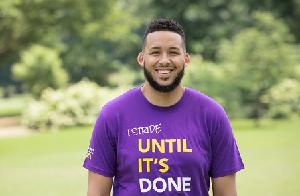 There are so many devastating diseases that affect people's lives every single day. Cystic Fibrosis is just one of them, but to my family it is the most pressing one to cure. My older brother Ben has been fighting it for almost 44 years. Hes been through Hell more times than I can imagine and still he gets up every day and kicks its butt. He was married in 2002, an a year later on our little brother's birthday underwent a double lung transplant. If he hadn't gooten his lungs, the doctors predicted that he would have died before the year was out. Since then he and his wife adopted an incredible son named Tyler, who is now 12, and despite all of the complications resulting from Anti rejection drugs, (the semi-annual skin cancer is a real thing) stomach migraines that put him in the hospital several times a year, diabetes, anxiety and depression and a host of other things, my brother shows up every single day to make the most of his life. He's gotten an additional 19 years on this planet and he and his family are not squandering a moment of it. My little brother Adam only got 16 years on this planet but he made sure to make an impact with every one of them. He was too sick to qualify for a lung transplant, but he didn't let that sour his life. He took 3 girls to prom his 16th year, he got his own 5.0 Mustang convertible, thanks to the amazing efforts and generosity of our high school and every single person he interacted with has told our family over the years what an inspiration he was and still is. I know I think back to my childhood and and blown away by how considerate and loving he was, and how he kept a stong sense of humor even through the scary parts of his illness. I can't imagine what that took for him to keep on every day. And my little sister Naomi got 20 years with us. She had a number of complications aside from CF, which made things extra difficult at times. She was a passionate, fierce, loving girl with very firm idea of what she liked and didn't like and wasn't afraid to speak her mind. I wish my kids had gotten to know my younger siblings, but we make due with telling stories about their antics and bravery and tenacity. I sincerely hope that if you made it through this post, that you choose to donate even a small amount towards finding a cure for Cystic Fibrosis. There have been some incredible advances in treatments and life expectancy has gone from 10 years old in 1980 to 40ish years as on 2020. Let's work to give these amazing people fighting this disease the opportunity to share their incredible strength with others for more than just 40 years.