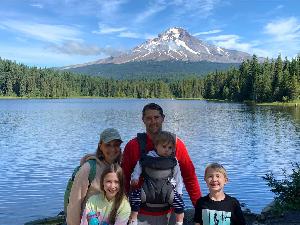 I hope you are all doing well! Yes, this is my annual ask for money, but if you don't mind, I have a short story to tell. If you do mind and just want to donate, feel free to skip. No hard feelings. Just maybe donate a little extra for the time saved.

I have to admit that when I was first hired by the Cystic Fibrosis Foundation, I was more than a little itimidated. I had been a few years removed from non-profit fundraising, wasn't sure if it was truly my calling (being the introvert that I am), and on top if it all, knew relatively nothing about CF. It did not take long to learn that the CF community in Oregon and SW Washington is an overwhelmingly positive and inspiring collection of families and supporters that would have a lasting impact on me. This September I will celebrate my 10 year work anniversary.

I am grateful for the opportunities I have had to connect with people in the CF community. I will always cherish my friendship with Kurt, an adult living with CF who was about my age. Kurt served as the chairperson for one of our walks. He basically organized the whole thing- securing the DJ, sponsors, even getting tables and chairs from his work, and breakfast donations from places in town where he shopped. When Kurt died waiting for a second double lung transplant, I truly learned how important our work is.

I am also grateful for the friendship that I have with Willem, a 60+ year old living with CF and the recent recipient of a double lung transplant. Willem lived most of his life concealing the fact that he was living with a fatal genetic disease. I met Willem and his wife not too long after he had decided to "come out" publicly. Their family had signed up for our Great Strides walk out of the blue and had already raised a significant amount of money for a cure. In a few short years, Willem became such an advocate for people with CF that he was recognized at our local volunteer awards ceremony, and was selected as CFF's first ever National Great Strides Ambassador.

Ten years ago, parents of people living with CF woke up each morning with the understanding that, in all likelihood, their children would not outlive them. Despite this, they approached us with vigor and served as volunteer advocates, to fundraise and educate the public so that one day the outlook for future generations would be different.

One year later, in 2012, the FDA approved the first ever drug that would treat the underlying cause of CF by changing the way that the defective CFTR protein functions. The news was monumental and considered a game changer for those in the fight against CF. However, this would pale in comparison to the test trial results of a new drug, Trikafta, that was approved two years ago. Inshort, these breakthrough medications will ensure that people living with CF will lead longer, healtheir lives than ever before. And this is a direct result of the generosity of so many individual donors such as yourselves, who have never met a Kurt or a Willem.

Although we have made great strides these past few years, we still have a long way to go. Many individuals with CF continue to be lost far too young, and living with CF still requires hours of treatment each day just to breathe. Several other new treatments are currently in development that may eventually lead us to a one-time cure for this disease, but in order to get there, we continue to need your help.

Please consider making a donation this year. Donating is easy and secure. Simply follow the prompts to make a donation. Any amount that you can contribute is greatly appreciated.

Yours for a cure,