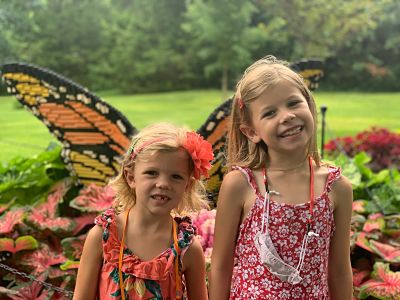 Thank you for visiting the “Fearfully and Wonderfully” team fundraising page!! Our team rides in honor and support of Abigail McLain!

During the weeks we were waiting for her test results, we held to the promise from the Psalms that Abigail was “fearfully and wonderfully made” by God. Regardless of her diagnosis, we knew that God had made Abigail exactly the way He intended and that He has a plan for her life. The Lord has given us a peace beyond our understanding, and a great hope for her future!
Since that time, we have learned a TON about this disease, both from a clinical and personal perspective. We make quarterly clinic visits to Cooks’ Children’s Hospital in Fort Worth, we do breathing treatments and chest physical therapy every day, twice a day, even on birthdays and Christmas! We do it because following the guidelines from her CF Care team are essential to minimizing lung damage and giving her the best possible outcome.

As we have learned about the disease and the specific care that Abigail needs, we’ve also learned about the amazing foundation that was started in the 1950s by a small group of families that refused to accept that there was little that could be done for their kids. At that time, when a child was diagnosed with Cystic Fibrosis, families were told that the life-expectancy for their child was five years and that they likely wouldn’t live long enough to start Kindergarten.

Kindergarten is an incredible milestone for all children, and for Abigail, one that we hold especially dear. We are incredibly thankful to the families who came before us, the giants upon whose shoulders we now stand, who laid the groundwork for the Cystic Fibrosis Foundation. Their work and the work of the Foundation has provided the research that has made possible the treatment plans and medication that have carried her gracefully to this important point in her life.

Thanks to the dedication of those families and thousands others like them, the life-expectancy for someone living with Cystic Fibrosis is now around 40. Praise God! How incredible that the money they have raised has supported scientific research to make such significant strides! It is deservingly known as “the best story in medicine!”

We have wholeheartedly thrown ourselves into involvement and fundraising with the CF Foundation! We have found support and friendship with other friends and families fighting alongside us for a CURE, and a hope that our children's lives might be free of lengthy treatments, medications, and the ever decreasing lung-function which will ultimately limit their life.