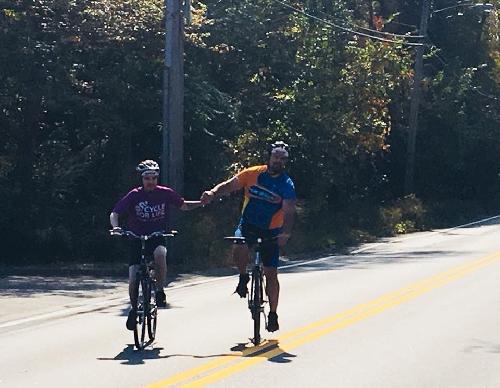 Michael and Dan crossing the finish line in 2017

This team was started in 2014 to help raise money to find a cure for my lifelong friend Michael Sullivan’s 3 boys, all diagnosed with CF. In 2014 we rode with hope and were inspired by Dennis, Dan, and Sean

On Father’s Day 2015 Dennis lost his battle. In the words of his father:
“At 4:30 this morning I said good bye for the final time to my son Dennis Sullivan. Cystic Fibrosis threw him a curve ball he couldn't hit. He fought for every breath he ever took. He never complained and felt sorry for himself. Anyone that had the pleasure to know Dennis is a better person for it...and anyone that never had that pleasure of spending time with him, you're the one I feel sorry for today. You missed out on a one in a million personality. I was honored to have you call me Dad. Dennis, you can finally rest your fight is over.”

We mourned and rode under an umbrella of grief that year and we all felt a greater sense of urgency to make a difference.

In 2016 Dan was the recipient of a successful double lung transplant…so successful that he rode 12 miles with our team in 2017…. talk about a fighter! The picture on the team page is of Dan Sullivan riding across the finish line in 2017 with his dad Michael after riding 12 miles.

Fast forward to July 17, 2019. Dan lost his battle this past weekend. Again, in the words of his father:
Last night we lost our son Dan Sullivan after a lifelong battle with Cystic Fibrosis. Daniel fought every day of his life and never gave up. He lived his life on his terms and never let this terrible disease define who he was or what he did. Even while he was fighting his own battle he would always be there to listen and help others struggling. Most never knowing he was dealing with his own personal hell. This is heartbreaking for our family, but we take some comfort that we had almost 3 extra years thanks to a lung transplant. A bright light has gone out in our lives. Our family will never be the same. But, just like Dan would do we will pick ourselves up and get back in the fight. Rest In Peace Daniel. We love you!!!

In 2020 our mission remains the same but is two-fold:

1. We ride for the Sullivan and Cosgrove families to preserve the memory of Dennis and Daniel who fought this disease courageously every day, showing strength and grace in the face of adversity. No family should have to endure the pain and suffering that these 2 families have had to deal with.

2. We ride for Sean, who continues his fight and is our beacon of hope for the future. Sean is currently taking the Vertex triple combination drug Trikafta and it appears to be a real life changer. Drugs like this are only possible due to research, made possible by the funds we raise.

Join our team and help us make a difference!