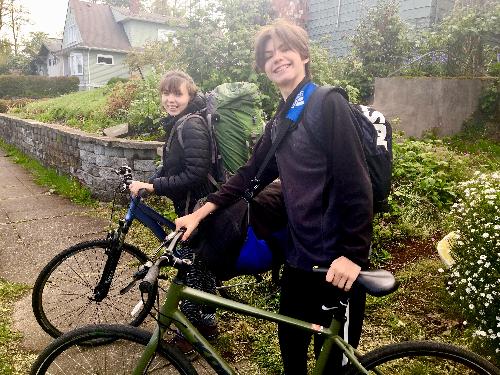 It’s been 3 (long!) years since Team Jude has come together to Cycle for Life and raise money for the CF Foundation. This year's event takes place on September 11, and is organized a bit differently. Frankly, it seems tailor-made for Team Jude, as it will be part of Cascade Bicycle Club's Woodinville Wine Ride--A 17 or 26 mile ride with wine tasting and food sampling stops along the route!

Usually when I sit down to write this letter and update the progress of CF research and Jude's health, I only have to make a few tweaks, insert a new picture from the past year. This year I'm writing about a whole new disease, and a whole new kid just finishing first year of high school instead of middle school!

On the eve of the pandemic, in late 2019, one of the biggest breakthroughs in CF treatment history became a reality for 90% of kids and adults with CF. A new drug was now available, that actually fixes the genetic defect that causes CF for those with the most common mutation. Jude was in that population. We didn't know what this would mean for him-- an already healthy kid that still showed no signs of lung disease or failure to thrive--and along with 25,000 other families with CF, waited to see what would happen.

The term "miracle drug" is a lofty term, but I'm not sure how else you can describe Trikafta. In the first few months, Jude gained 20 lbs. Almost 3 years later, he is off most of his inhaled medications and airway clearance treatment (at least during times of the year when he is playing frisbee almost everyday!) His lung function was always good, and yet it also improved. For those in advanced stages of CF, the impacts were far, far greater. People who used to not be able to walk up a flight of stairs could do so. Lung function rose dramatically. Hospitalizations went down. Plans for college, a career, a family became a little more realistic with lifespans increasing.

Even with the celebratory news of Trikafta, and the almost immediate impacts on the CF community, the CF Foundation never slowed down with research, and never took a victory lap. This organization has a goal of curing CF for every child and every adult with CF. The reality is that the progression of lung disease still takes way too many lives, too early.

I also continue to be thankful for the work they do beyond fundraising and research--advocating at the state and federal level to keep health care as available and affordable as possible for families facing CF and other illnesses. I'm glad the CFF is in the fight, and happy for my money to keep them in for the long haul.

Join us. Even if you can't ride, you can support Team Jude with a donation to the CF Foundation by clicking on "donate to a team member" from the top of this page! If you want to ride, just click "join our team", raise the minimum amount, and the CF Foundation will send you a code to register with CBC's Wine Ride on September 11.

Thank you! Pam, Lillian and Jude