Join Our Team   Register for This Climb   View Team Members 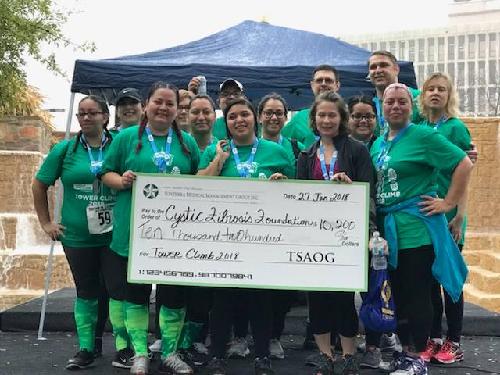 It is that time of year again to support the Lone Star Chapter- Cystic Fibrosis Foundation 2019 Tower Climb!

The climb is THE fundraising event of the year for the chapter. As many of you know my son, Andrew, has Cystic Fibrosis. He has developed into a remarkable young man. He is studying Biomedical Engineering at UT-Austin, is an avid weight lifter, and loves to travel and hang out with family and friends. The treatment of this devastating disease has changed significantly since Andrew was diagnosed as an infant. As a child Andrew required hospitalizations about once a year (usually for 2 weeks at a time) for “tune ups”, that is, aggressive chest physical therapy and intravenous antibiotics.

When Andrew graduated from high school in 2015, he got a horrible lung infection and ended up in the hospital for a week and IV antibiotics for two weeks. The strong antibiotics did their job and he recovered. He went on to have a great summer and then move out to start his freshmen year in college. When he was younger, we couldn’t have imagined him living on his own to go to college or how he would manage with frequent illnesses and hospitalizations.
He has not been hospitalized for his cystic fibrosis since! Why? In the summer of 2015 he started on the breakthrough Cystic Fibrosis drug, Orkambi, whose research was funded through the Cystic Fibrosis Foundation. It is a drug that targets the specific cause of CF rather than just treating the symptoms. His antibiotic use has been drastically reduced and his lung function also improved. But CF is a progressive disease, which has caused Andrew to develop diabetes and liver disease. He manages his diabetes with insulin injections every time he eats but unfortunately there is currently no treatment for the liver disease.

We are so grateful for CF Foundation’s relentless fight to cure this horrible disease. We are even more grateful for the donors because without funding there is no research! Orkambi has already been replaced by a new, slightly better drug and an even newer drug is on the way that will likely be much better based on preliminary clinical trials. Money buys science and science buys the hope for a cure for children and adults battling CF that there will be a brighter tomorrow.
Our hope is that with the newer drugs, younger CF patients will be helped before these complications develop. Thanks to the CF Foundation, parents of babies born with CF today do not receive the same bleak diagnosis that we did 21 years ago, but there is still work to be done!

I humbly ask for your meaningful contribution to this year’s Tower climb!