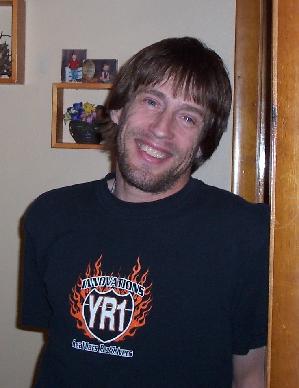 Join our team and help us get one step closer to a cure for cystic fibrosis – a rare, genetic, life-shortening disease that makes it difficult to breathe.

We stride for my brother and uncle, Greg, who was not diagnosed with CF until he was 31. At the time, the average life span of a person with CF was 31-32 years old. Greg only let this diagnosis get him down for a bit, then his fighting nature took over and he was determined to live. He had good days, he had bad days, but he loved his family and friends. He passed away at the age of 46. My daughter and I formed the team Greg’s Legs back in 2005, after learning about Great Strides.
Great Strides is a way for us to carry on my brother’s memory. After the first walk we attended at the Tulsa Zoo, we wanted to form a team. My grandsons came up with the name Greg’s Legs, since he was not physically able to walk for a long distance and we would be his legs doing the walking. I also wanted people to know who Greg was. I made a badge with his picture and told him about it. He told me, “No, I don’t want my picture out there. I’m private.” I explained why I wanted to do this but he remained adamant. Until the morning of the walk, he called and asked me if I still had the badge. He said, “Go ahead and wear it, show my picture, maybe some good will come of it.” So I wear my brother’s picture, not the face of a young child, but a grown man who grew up not even knowing or understanding why he felt bad, why he coughed so much that teachers would ask him to leave the class room, why he had no energy and felt pain in his chest. We stride because Greg was a fighter, never giving up, always living his life the way he wanted. Greg read books and researched, even without a high school education. After learning when he was 31 that he had CF, he began research on his own on how to best live with this disease. Because of Great Strides and the CF Foundation, he received some assistance with medication. When first diagnosed there were not as many available treatments. Because of CF, he was not able to work, but he also did not want to be a burden to anyone so I would ration his medications, taking them when he was the sickest. No one should have to live like this! However, he still did the things he loved, he hung out with his friends, he rode his motorcycle, and he built and raced cars. He had a love for life. He was a fighter and we continue the fight to find a cure for CF!