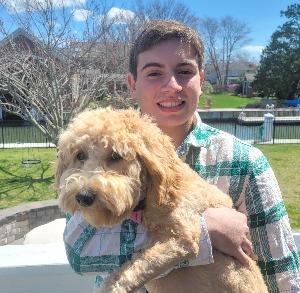 A DAY IN THE LIFE OF OUR SON JOSEPH THOMAS

Joseph' s day begins differently from most 16 year-olds. He starts his day with three drug treatments administered through a nebulizer and one treatment through an inhaler. The first nebulizer treatment is Albuterol to open up his lungs, the second is Hypertonic Saline to loosen the mucus that accumulates in his lung and the third is Pulmozyme which helps breakdown the mucus. This mucus causes the chronic, life-threatening lung infections associated with Cystic Fibrosis. As we are administrating the nebulizer treatment, Joseph receives chest percussion therapy given to him through a vest that fills with air and pounds on his chest. The chest percussion helps clear the mucus broken down by the Pulmozyme. He then inhales a steroid to assist with his breathing. Over 3 years ago Joe developed an infection called pseudomonas aeruginosa (or pneumonia) so in addition to his normal regiment of medication and therapy Joe inhales either a drug called Tobramycin or Cayston depending on his doctor's recommendation 2 to 3 times a day rotating every other month. This entire treatment session take approximately 45 minutes. If these treatments are not successful he would need to be hospitalized to have PICC line inserted into his arm and antibiotics would be administered to him intravenously for almost a month.

Joseph’ s daily eating routine is the same as most children his age with the exception of adding Pancreatic Enzymes to ALL of his meals. Cystic Fibrosis affects Joseph's digestive system by preventing the breakdown of food for proper absorption of nutrients. The Pancreatic Enzymes assists with the break down allowing him to develop at a normal rate. Joseph takes approximately 20 Pancreatic Enzymes pills a day.

A new medication called Trikafta was released 2 years ago to help with the fight to improve the lives of those with Cystic Fibrosis. Although not a cure we are happy to report that Joseph started this medication and his pulmonary function tests have increased beyond our expectations. This would not have been accomplished without your donations. The medication has not only helped Joseph, but has also helped thousands of patients breathe easier. Especially during this time of COVID-19, Joseph having an increase in pulmonary function makes it easier for him to fight off viruses and other illnesses.

Please help us continue the fight and ultimatley find a cure for Cystic Fibrosis.