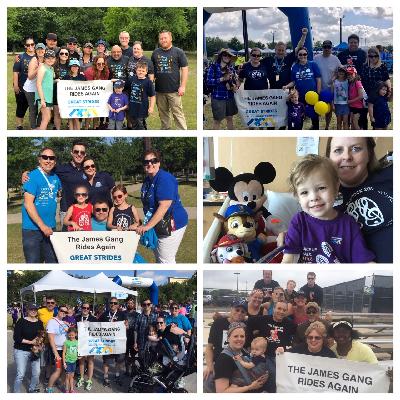 James was born with a bowel obstruction which required surgery at 3 days old, then he was officially diagnosed with Cystic Fibrosis at 6 weeks old.  CF is a genetic disorder that affects the lungs and pancreas.  James does two breathing treatment sessions, and chest physiotherapy each day to help break up the thick, sticky mucous in his lungs.  Plus, he takes pancreatic enzymes with each meal and snack to digest his food.  Then he does overnight feeds through his gastronomy tube (g-tube) to gain/maintain weight. Last year James began a breakthrough drug, Trikafta (a CFTR modulator), which helps to restore function to the underlying cause of CF. The year before, he took another breakthrough drug called Symdeko. The median life expectancy has gone from 37-46 years old just in his lifetime, and has increased substantially in the past 25 years.  CF patients often did not live long enough to reach elementary school age.

However, amazing research is being done to develop lifesaving drugs and treatments, and to ultimately find a cure for CF!  The future for CF patients is promising with the development of drugs such as TriKafta (2019), Symdeko (2018), Orkambi (2015) and Kalydeco (2012), as well as brand new technologies in lung transplantation.  But…there is still so much more work to be done.