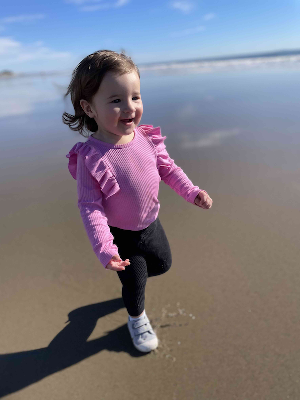 May is Cystic Fibrosis Awareness Month. We're focusing on raising funds to us get one step closer to a cure for cystic fibrosis as well as to raise awareness of what CF is and how people and families are impacted by a CF diagnosis.

The CF Foundation leads the way in the fight against CF, fueling extraordinary medical and scientific progress. The life expectancy of someone born with CF has doubled since 1988 due to scientific advances. Despite this progress, many people with CF do not benefit from existing therapies either because their disease is too advanced or their genetic mutations dont' respond well

We are standing on the shoulders of so many other families who have fought tireleslly to find answers to their children's poor health, which lead to the discovery of CF and then went on to fight to raise money to find a cure. These parents and children have had to ensure so much during this fight and we are so grateful for their endless efforts to create medicines and treatments that will and are helping to make CF a liveable disease, one which will be cured in Naomi's lifetime.

It's important to our family that CF'rs feel supported in their journey and know that they don't have to face anything alone.
What is Cystic Fibrosis?
Cystic fibrosis is a rare, progressive, genetic disease that causes persistent lung infections and limits the ability to breathe over time.

It's a "salty" disease! It is caused by a defective gene that doesn't balance salt and water properly in the body. This leads to a thick, sticky buildup of mucus in the lungs, pancreas, and other organs. In the lungs, the mucus (kind of like sticky gum) clogs the airways and traps bacteria leading to infections, extensive lung damage, and eventually, respiratory failure.

In the 1950s, few children with CF lived to attend elementary school. Today, advances in research and medical treatments have further enhanced and extended life for children and adults with CF. Many people with the disease can now expect to live into their 30s, 40s, and beyond.

Things to know about CF:
- When healthy, people with CF spend 1-2 hours a day doing breathing treatments and wearing a "shaky" vest to help loosen mucus. That’s 1 month a year. This can increase to 4 hours a day when they have a cold.

- It can be a lonely journey. People with CF can never get in close proximity to another person with CF. They carry bacteria in their lungs (even when healthy) that can get in the lungs of other people with CF through coughing, breathing or sneezing. This community tries to keep each CF person's bacteria to themselves so that they don't create "superbugs" by sharing the bacteria back and forth between CF'rs creating stronger and more dangerous bacteria that primarily only harms people with CF

- Naomi was diagnosed at 3.5 weeks old

- The predicted median age of survival for a person with CF is in the early 40s.

- More than 25 promising lifesaving mediciines are currently in development

- people with CF get extremely pruney hands when they get wet, even for a few minutes! This is caused by the salt and water not properly flowing in and out of their cells -- this happens to some people who carry the defective CF gene as well!

- Nearly $3B was spent by the CF Foundation on its mission and advancing new therapies over the past 25 years.

- Breathe from Salt: This inspiring book is the discovery of CF, the fight to find a cure, the science behind the disease and path to a cure.

- Stories of kids with CF: @cystic_fibrosis_warriors_

Living with CF: Living with CF means incorporating various treatments and precautions into everyday life to stay healthy. This includes doing inhaled breathing treatments as well as vest therapy to break up sticky mucus that can get stuck in the lungs. It means avoiding/social distancing from anyone who has any symptoms of a respitory illness such as a cold or flu, no matter how mild the symptoms may be. It also means keeping the environment free from germs and bacteria. Not only do people with CF have to take precautions to avoid typical germs we may be all aware of, Cf'rs also have to avoid germs that do not typically cause any symptoms in people without CF. This includes a variety of bacteria that exist in our environment, water sources and soil that can be difficult to get rid of once inside someone with CF.