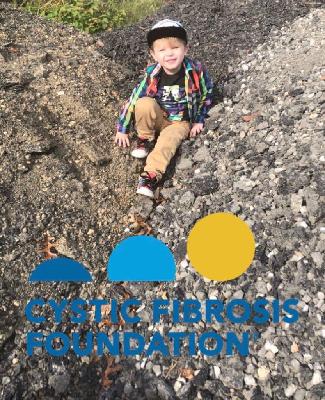 Warren is a busy toddler. He spends his days playing, dancing, laughing, learning, and exploring. However, because of Cystic Fibrosis, a lot of his day is spent taking important measures to keep him healthy and thriving. Here are some facts about Warren and how CF impacts his daily routine:
* Warren takes about 16-18 pills per day including 2 medications for acid reflux/GI issues, 2 medications for sinus/allergy issues, and a required daily vitamin. He has medications that he swallows, inhales, breathes in, and some that go in his nose, eyes, and ears. He has back up meds and just incase meds and if we don’t give them to him right on schedule, he screams, “meds”! We have a TOTE full of back up or extra medications.
* When we go to the doctor or the hospital, all of the medical professionals comment on how “medicalized” he is; he opens his mouth, turns his head when they check his ears, and now knows to "blow out his candles" while they listen to his lungs. It’s great that he’s learning but sad that he already knows what to expect during his appointments.
* Warren does two Chest Physiotherapy (CPT) treatments a day, each lasting about 30 minutes. This also includes 2 medications via inhaler and 2 via the nebulizer. If he gets a cold, we increase that to FOUR treatments per day. He has been doing this since the first few weeks of his life and is used to this as part of his routine. He now uses the vest and is pretty good about turning it on and helping us put it together each time.
* When Warren gets sick, it often turns into a CF exacerbation which results in a hospital stay for about two weeks with two different IV antibiotics.
* There are tons of different CF variants, but Warren has the most common (Double Delta F508 or ΔF508). Most people don’t know that Warren’s lungs are not the only thing impacted. His pancreas also has malabsorption, which is why he takes enzymes before every meal. This means caring for Warren involves vigilance on his diet, which must be high in fat, protein and salt (most people’s dream). Thankfully, Warren has not struggled with weight as many other CFers can be failure to thrive or consistency under weight.

*New in 2019, Warren was also diagnosed with CF related liver disease. This is common in people with CF but often seen more in older children/young adults. Thankfully, Warren's is not too severe in that it would stop him from taking CF modulators. Warren will participate in his first clinical trial in January of 2020 which involves him starting a new medication, ORKAMBI. He's the first group of 2 year olds to start this medication due to our fundraising efforts!!

http://fightcf.cff.org/site/TR/GreatStrides/141_Delaware_Valley_Philadelphia?team_id=90457&pg=team&fr_id=7889Like all parents with their kids, we are grateful for everyday we have with Warren. And like all parents, we worry about when he will get sick, what his future will be like, and if we are doing a good job and keeping him healthy. We take it one day at a time and celebrate every milestone.

Warren’s Warriors exist to support children living with CF, so they can spend more time playing and less time treating this disease. We hope you will join our team as either a participant or a supporter. Warren and the entire Warren’s Warriors team thanks you!