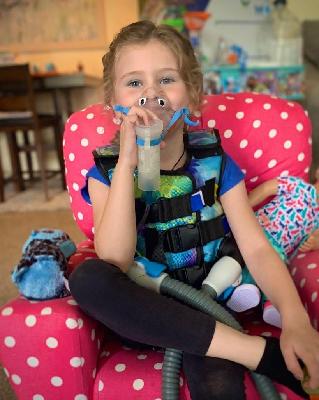 Cystic fibrosis is a progressive, genetic disease that causes persistent lung infections and limits the ability to breathe over time. In people with CF, a defective gene causes a thick, buildup of mucus in the lungs, pancreas and other organs. In the lungs, the mucus clogs the airways and traps bacteria leading to infections, extensive lung damage and eventually, respiratory failure. In the pancreas, the mucus prevents the release of digestive enzymes that allow the body to break down food and absorb vital nutrients.

Leila takes many medications, both oral and nebulized to slow down this progression. We do chest percussion therapies for 30 minutes twice a day every day. When she is sick, these increase to 4x a day. Though Leila eats close to 3,000 calories a day by mouth, she receives an extra 1,125 calories at night while she sleeps through a feeding tube.

Leila takes her daily treatments in stride. Her personality shines brighter than the sun, and you would never guess she was battling a fight that cannot be seen with the naked eye.

She Loves to play at the park, help around the house, and has a super philosophical mind!

'Leila' means 'night' in Hebrew. She truly is as magnificent as the Night Sky.

Our wish is for our Night Sky is to shine bright with lots of twinkling stars. She deserves to see as many tomorrows as possible.

There is ZERO government funding for this disease. The life expectancy for those living with CF has continued to raise throughout the years trough fundraising and donations alone. That is why we need your help!

By making a donation, or purchasing Leila Sky's Lucky Stars gear, YOU will officially be one of LEILA SKY'S LUCKY STARS!! All proceeds go directly to the Cystic Fibrosis Foundation on behalf of Leila.

What an honor, to know that when the day comes that CF stands for CURE FOUND, you can say you played a big part of that.

Help us fill our Night Sky up with lots of shining stars, and add more tomorrows for the over 30,000 souls in the US fighting this disease.