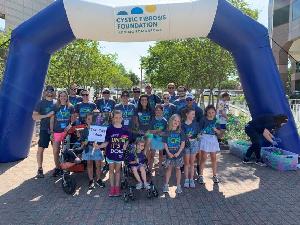 The story behind Take It Away starts with one little girl who was born with a chronic, progressive and incurable disease called cystic fibrosis. Over time, the weight of this disease and the burden of handfuls of pills and twice-daily lung treatments began to build. When she was 4 years old, she begged her parents to “take it away!” Knowing the daily impact this disease would continue to have on her life, it’s incurable nature, and the way it would damage her body over time, they knew they could no longer sit back and just wait for might come in the world of medicine. They had to do more.

They began participating in local fundraisers for the Cystic Fibrosis Foundation but it wasn’t long before their fight for a cure grew even stronger. Soon after their second daughter was born, they received the devastating news that she also had CF.

It is from this place of hurt that a new hope and vision was ignited. Through much prayer, consideration, and the commitment of others, the non-profit organization, Take It Away, was formed. Our mission is to make a positive impact in the lives of those affected by cystic fibrosis by raising awareness, rallying community involvement, and monetarily supporting the research aimed at finding a cure for CF, not only for these two sisters but for all of those who struggle with this life-threatening condition.

You can read more about us at takeitaway.org