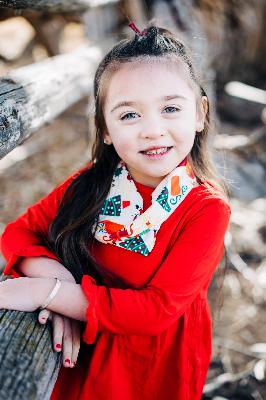 When I was asked "Why I Stride" my mind immediately went back to the very first Great Strides that we ever attended.

Iris was only a few months old, and we were under the impression that she was just a carrier of the F508 gene, and nothing else. We decided that we would attend every year so Iris would know the community and know that they were working on a cure. My sister Tara even brought her family to support us. I met other Moms, and was fully embraced by every single person we met - united in a cause to find a cure.

Our world changed that fall when we were finally able to get Iris into the clinic, another sweat test, and genetic testing. We found her second gene - and we still wouldnt have definitive answers for another 4 years. Iris' second gene is considered a Wild Card gene - it can cause CF or Not, and when it does cause CF then the severity can range drastically. Our diagnosis would change from CRMS, to CFTR disorder with CF related Pancreatic Insufficiency and finally move to Cystic Fibrosis at the age of 4.5 in May 2019.

Throughout all these changes our mission changed. We needed to find a cure NOW because we never knew what life was going to throw at us, or IF things would change. We began to fundraise that second year, even when we thought she wasnt going to be affected by CF, because now HER children would for sure carry a gene for CF and it was possible her child could have a more severe form then she did.

As she began to show symptoms of the disease and needed to take Creon, it began to hit home for the people close to us. She suffers from drastic GI issues, which can impact her every day life. My parents and siblings saw first hand how much pain she could be in because she wasnt processing her food correctly, and every single aunt had a bottle of Creon at their house just for when Iris visited.

Iris' genes certainly know how to throw us curves. Her pancreas started working again in April of 2019, so we were going to take a step back from the clinic. We were in talks about changing to only 2x a year in the CF clinic with visits still to the GI Drs, when we just decided to repeat her sweats once more. When we left the appointment I had hope that maybe, just maybe, we might escape the worst of CF for our little princess. Her sweats came back over 60, which is the magic number to change your world from "Maybe One Day" to RIGHT NOW.

We were called with the results and immediately went into talks with the clinic about what would happen next. Albuterol, VEST treatments, Flovent and now talks about sick plans, 504s and more. Just when we thought we might be getting out we got thrown right back in. We had a choice to be drown in everything or to pull ourselves to shore so we could see the big picture. Luckily I have the most amazing support system in my family.

This year, 2020 Great Strides, we started with a HUGE kick off. Popcorn fundraising, vinyl stickers, POSH sales, and more. We currently sit at over $14,000 raised for one single reason. A Cure.

We NEED a Cure for Iris. We NEED a cure for every single person with CF. It is completely unacceptable for someone to have to live in fear - a fear of suffocation by the very organs that are supposed to help you sustain life. Fear of being able to afford medications. Fear of being a burden on those who love them A fear of never truly being able to LIVE."