Pam learned her 2-year-old son, Gavin, was diagnosed with cystic fibrosis when she was six months pregnant with her second son, Jake. Within three weeks she was presented with the startling reality that both her sons had the same genetic disease. “I went from not knowing anything about cystic fibrosis to having two children with CF,” said Pam.

After the diagnosis settled in, Pam and her husband learned about Great Strides and set their sights on becoming the number one team in Georgia, with only two months to fundraise until the event. “We are very competitive, so we asked what the number one team raised the previous year and set our goal,” she said. “We jumped right in, raised $30,000, and became the top fundraising team in Georgia. That’s what we’ve done ever since.” 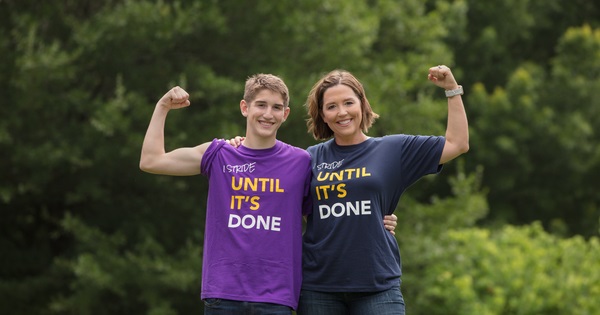 For many, Great Strides is a day filled with hope, and a time for the CF community to gather together to celebrate milestones. “Our power was stolen from us with the diagnosis, so it was our way of taking our power back and not giving up that easily. It was our coping mechanism and how we dealt with it – to fight. We are fighters.”

Gavin, now 19 and Jake, now 16, battle the same disease, but remain healthy through their hard work, exercise, and adherence to their daily treatments. From playing lacrosse and tennis, tackling high school, applying to colleges, to speaking at various CF Foundation events – both boys have yet to let CF hold them back.

Pam advises newly diagnosed families to focus on the positive moments and not to get caught up in the worry of CF. With strict medication schedules, treatment plans, and germ prevention – it can be a lot for any parent to adjust to and is often overwhelming.

“You need to focus on the positive part of CF – like the opportunities and people who have been brought into your life – and worry less about the little things. It’s so much healthier for your mind and your soul.”