Cystic fibrosis is an inherited, chronic disease that affects the lungs and digestive system of about 30,000 children and adults living in the United States (70,000 worldwide). A defective gene and its protein product cause the body to produce unusually thick, sticky mucus that:

In the 1950s, few children with cystic fibrosis lived to attend elementary school. Today, advances in research and medical treatments have further enhanced and extended life for people with CF. Many people with the disease can now expect to live into their 30s, 40s and beyond.

Since 1955, the Cystic Fibrosis Foundation has been the driving force behind the pursuit of a cure for all people with CF. Thanks to the dedication and financial backing of our supporters — people with CF, their families and friends, clinicians, researchers, volunteers, individual donors, corporations and staff — we are truly making a difference in the lives of those with cystic fibrosis. 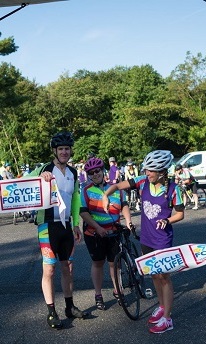 Megan Barlow, Greater New Jersey chapter’s CF Cycle for Life Ambassador, cycles alongside family and friends to help keep her lungs healthy and fight towards a cure for cystic fibrosis.

Donate to a Cyclist or Team

Search for a cyclist or team to make a donation, or make a general donation.